Rihanna’s been spotted getting into the action at basketball matches frequently as of late, but whether she’s been excitedly cheering on her favourite team or accidentally smashing a senior police officials mobile while busy taking selfies, her style is always refreshed with a unique edge and divine fashion sense. So favouring her recent styling of the bucket hat – a trend that’s getting huge – HTF wanted to rework her look into a wearable outfit for any opportunity.

BUT, simply recreating a carbon copy of Rihanna’s look would be boring; plus, we’ve all witnessed what happened when one unlucky RiRi fan attempted the exact style worn by her idol. So with all this summer sun we’re taking inspiration from her experimentation with floral patterning for some dabbling with hot hawaiian vibes. 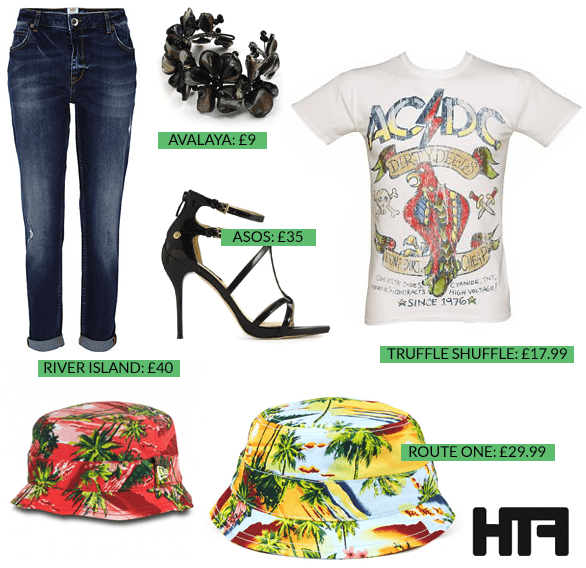 To get started, a pair of slim, cropped jeans will set the sassy tone as established by Rihanna’s look. Though whether it’s a slouchy style or super skinny, this look  is great in that it works great tailored for any fit that compliments your figure best. A trusted brand by the songstress herself, we were inspired by River Island‘s Boyfriend Ashley Jean to give enough swag without appearing too casual.

Rihanna’s penchant for strappy heels is noted in these cute shoes from ASOS. With the skinny buckle straps providing enough subtle detailing, a fuss-free look is achievable without worrying about them being too plain, and they trick an illusion of longer legs when set against the crop fit of the jeans. Win! Matching the heels to a chunky black bracelet too rounds the outfit nicely – this one we sourced from Avalaya – an alternative site that’s got some bold but intricately designed pieces, and an appealing price-tag too.

The gothic styling on the bracelet helps compliment the mix of grungy to chic that Rihanna’s created with the AC/DC top, which has since become a a rarity since being spotted on Rihanna. Sold out from Urban Outfitters as well as traders on Ebay, we recreated the look with Truffle Shuffle‘s faded AC/DC top, which features all the right colour tones to round the outfit nicely.

Then finally, the bucket hat. Where Rihanna’s look is completed by a camouflage bucket hat, we were inspired by New Era’s ‘Island Bucket’ design. Inspiring a modern twist on the classic Hawaiian look, their latest design has refreshed a trend that’s set to soar through the summer months. Bang on trend and giving a nod to a sophisticated and relaxed style, the patterning and tones of the hat are the ultimate compliment to the look.

Or if florals and bucket caps just don’t cut it, have a browse of New Era’s exclusive range of caps and hats to achieve the finished look you’re aiming for.