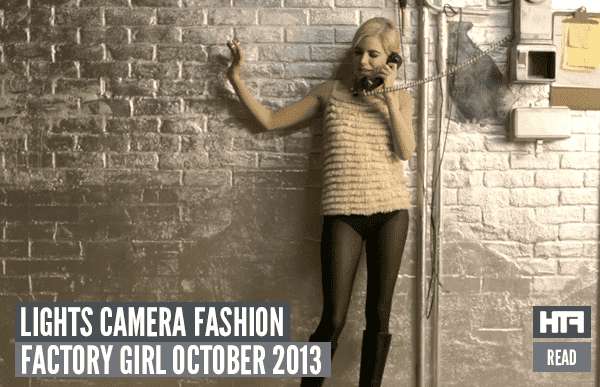 With a flair for fashion as strong as her kohled eyes and a feminine charm revealed in her gamine features, Edie Sedgwick’s style marked her as a key figure of disparate youth in the 1960’s. So even after her untimely death at the tender age of 28, her iconic image shines through into modern culture and continues to inspire fashion design today.

Yet for those of us born way after the swinging years, you’d be forgiven for recognising the fashion she personified but little more about the model, actress, and protÃƒ©gÃƒ©e to Andy Warhol. That is of course unless you’ve seen 2006’s fictional biopic, Factory Girl.

With her nonchalant demeanour, inquisitive presence and her uncanny resemblance to Edie, Sienna Miller breezed effortlessly into the role – the difficulties came with recreating that iconic style.

An exciting prospect for any costume designer, John A Dunn sourced vintage pieces to recreate Edie’s glam mod style while carefully working the intricate details of her personality into Sienna’s costume. Inspired by video recordings and biographical accounts from the lady herself, Dunn successfully recreated Edie’s youthful spirit and the wicked sense of fun she embodied into the recreations.

Influenced by her dancing background, Edie’s penchant for incorporating leotards into her everyday wear was a regular occurrence, and Sienna’s costumes were no exception!  Whether she was prancing around the studio for a snap-happy Warhol or decked up in gold for a social event, her ability to sophisticate a flimsy piece of lycra into an outfit further emphasised her lithe figure and seemingly unfaltering self confidence.

A keen follower of fashion, Edie’s divergence into the arts and fashion was her form of escapism from her troubled childhood and a rebellious transition into an edgier lifestyle than her blue-blood lineage had previously accommodated.

A charming character to heart, Edie’s gentle demeanour show’s through the soft, luxurious textures and neutral colours of the clothes she wears. However, while her style is best described as cosy and delicate, the personal touches that summarise Edie’s iconic look add an edgy finish and a bolder statement to her looks that reveal her fractured personality beneath the graceful exterior.

Her mix of plain leather to white fur highlights the conflicting worlds she is a part of. From the experimental social circuits she belongs comes the dashes of urban fashion that find their way into her outfits. Where the rest of her style is sophisticated and demure, it is made unique by her decision to dare more skin than expected, or perhaps mingle with a group who might deem her smarter attire too classy for  their neighbourhood. So for all the social circles came a newly acquired influence to her style.

Imbrued with a strong confidence from her high-society heritage, Edie’s nonchalant attitude dedicated itself to her modelling credentials and confidence to carry off the mod style with her own quirks and bold style. When she’s not wearing leotards, she’ll undoubtedly be wearing fur – which is frequently emphasised with an animalistic addition of leopard print. Perhaps a match to her fun loving instincts, her light-footed step, and of course, her arduous hunt for fame.

Dunn captures the perfect adage of textures so that not only are the outfits kept interesting, they don’t crowd the look. Instead of layering materials, Edie’s two garment look is simply added to with another layer in the form of a furry coat or sweater that offers warmth, and more importantly, style without overcomplicating things.

In true Edie fashion, she ventures to the streets of New York with non other than a leopard print bag and a mountain of fur, but this time styling a prominent beacon of orange leather. Against the dreary whites and greys of the concrete jungle, Edie certainly makes her appearance known in the wider catchment of people than the studio draws.

Placed firmly in her comfort zone among the adoration of friends and admirers, it’s clear to see Edie feels liberated from the change in hairstyle and the bolder colour she wears. Though as fate would predict, with the high comes the low.

As insecurity begins to take hold, Edie’s style takes a safer take on fashion. Instead of her sultry choice of golden tones and soft fabrics, Edie instead opts for plainer styles of shift dresses and leather caps without the quirky designs her previous style subtly achieved.

Irregardless of her final darker days, her dedication and influence upon 1960’s fashion was so prominent that Christian Dior’s Spring 2005 Couture Collection channelled the star’s collaborations with the Warhol Factory as a key influence.

So despite her 15 minutes in the limelight, it’s a sure testament to Edie’s memory that her socialite status captured the attentive gaze of society for the clothes she wore, not her lack of.