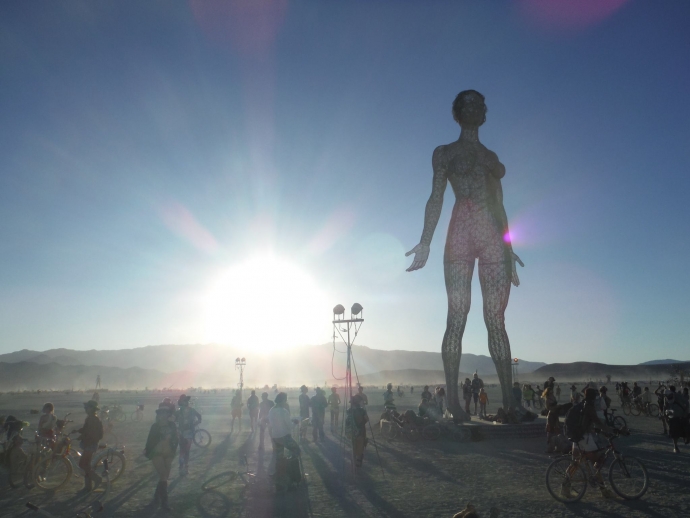 It’s been five days now since the man burned with an inundation of fireworks and explosions that left even the most imperturbable of us mesmerized. I was sharing my final day with an inspiring artist I’d just met from San Diego, and looking back witnessed thousands of others all connecting in ways beyond reality, breaking the so-called boundaries of race, creed, colour and religion to unite under the ten principles of Black Rock City.

I’m presently sat at a computer for the first time in a while, acclimatizing back to the confines of social boundaries and trying to snap back into routine, yet my mind races with endless possibilities for next year: “What costume can I make?”, “What are the logistics of running a bar?”, “How can I contribute in a different, creative way to the 350 other camps in Black Rock City?” and raises such questions as “Why have I always been so focussed on money?”, among many other ways Burning Man has challenged me to think about life and the way I contribute to the world on a day-to-day basis. 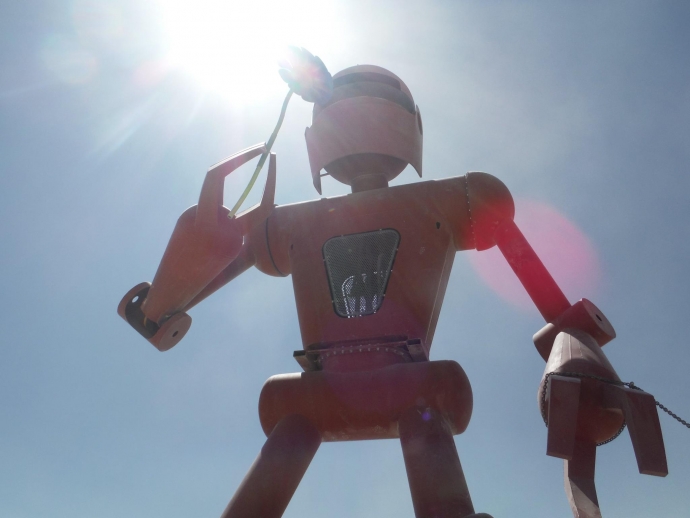 This year, 2015, was my first at Burning Man. My journey to Black Rock City dates back a few years, when my friends Amrick Channa and Rob Neale introduced me to a promoter at a villa party in Ibiza. As she described her adventure to the city and showed us a few photos, I was awestruck. This was something we all agreed there and then we would go to as soon as possible but the thought of the expense, eight days in the unforgiving climate of the Nevada desert and the willingness to step outside my comfort zone meant things didn’t materialise. I disguised these reasons with various excuses such as “I can’t afford it”.

Fast forward to 2015 and I’d been travelling through South East Asia and to The States by myself, after taking a huge leap out my comfort zone and heading for what I’d wanted to do my entire life. After meeting the most inspirational people, this encouraged me to look at connecting in a totally different way, and after meeting someone called Freddy in a nightclub in Hollywood, he showed me photos of a project he was involved with at Burning Man, ‘The Black Rock Bijou’, and invited me to join their camp this year. I didn’t have tickets at the time, but Freddy offered to source some. I sent $800 for two tickets to a guy I’d known for around 30 minutes, booked the flights and simply waited.

On the day of Burning Man 2015, the moment of truth had arrived. I nervously headed to Will Call to collect my tickets, replaying in my mind the words Freddy had told me “A burner would never screw another burner” and as they handed the tickets over to me, an elated feeling of pure ecstasy coursed through my veins. I was about to enter the gates of the number one item on my bucket list, and my life was about to change for the better.

My expectations of Burning Man were fairly scattered. From the descriptions of those who had been, I really didn’t know what to expect. I guess I had a sort-of ‘Mad Max-come-Camp Bastion’ style setting in my mind with nude hippies wondering about pushing Acid into my eyes on a daily basis, but the reality of it was completely different, and impossible to describe. It’s not a festival and it’s not really even an event. Sure, it’s the third largest city in Nevada when it’s up and running, but even then you have certain connotations to what a city is. Burning Man is something beyond your wildest imagination, the combination of 70,000 individuals across more than 300 camps each with something unique, inspiring, creative and unconventional to contribute. 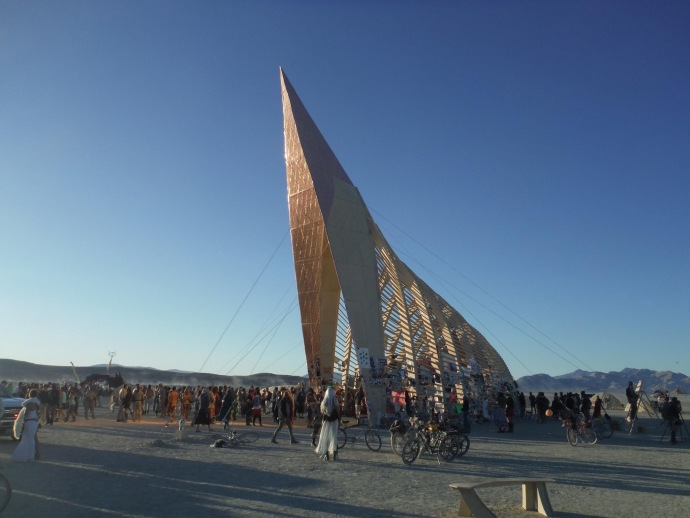 There’s a good reason you can’t put Burning Man into words. I tried making notes, but within just an hour I’d covered five pages of paper in scribbles, and that was just from the camp we were in. There was around five burners I’d met so far from The Black Rock Bijou, and already I’d met five of the most incredible people I had come across in my life. Their hospitality was insurmountable and they each offered a different contribution, a story, a plethora of characteristics and energy I simply struggled to get my head around at first. I later went down to discover their project, The Black Rock Bijou, a movie theatre located amidst the deep playa which alone I struggled to put into words. They were giving away free candy in the foyer of a building that left my jaw to the ground. To think this was assembled in under a week and to be de-constructed again at the end was difficult to comprehend. I could have written an entire book about my experiences with The Black Rock Bijou alone…and that is just one of the many camps that offer a different and exhilarating contribution to Burning Man. 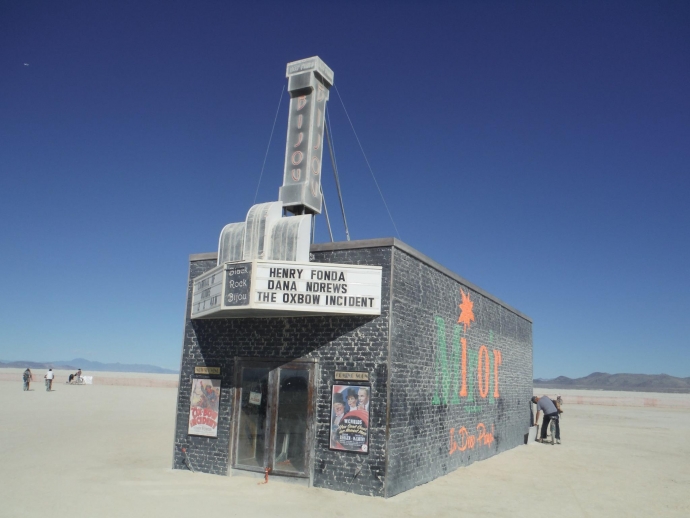 Every person that attends has an entirely unique experience, and it is impossible to see and sample the delights of every camp. Money and brands are banned, which curates a unique environment of gifting, spiritualism and creativity you just don’t see anywhere else. The first time I went to a bar, I was given a Mojito, free of charge. I felt a bit guilty at first, but as time played out I realised this was what it was about, and while I’d only brought a limited surplus of items to gift myself, I felt the desire to share compassion with everyone and contribute in ways far beyond materialism. If anyone was on their own, I’d make an extra effort to introduce myself, find out more about them, and share the experience. This was one of the most rewarding things for me, and has curated some friendships that would not have been possible outside Black Rock City.

There was a lingering presence of law enforcement (a small percentage of them, not all of them!) around Black Rock City and I heard of a few bars that had been raided within the vicinity of our camp, there were cruel stories of entrapment and as we headed out to The Robot Heart, an art car providing the most intense House Music through the early hours of the morning, a row of patrol trucks created an intimidating existence that was unwelcome. I’d read articles on-line prior to Burning Man about how this new era of law in the city had turned things towards a sour direction and many had chosen not to attend this year because of it, but something I quickly came to realise after just a day in the city, was the power of kindness, compassion and community among burners out-weighs the negative presence tenfold. I liked to think of burners as a large school of fish, banding together to create safety in numbers against their predator.

My faith in the good of the human race was never absent, but slightly jaded. Burning Man provided the catalyst to relight the flame of positivity that dwindled somewhat in the wind of society. After a dark relationship with an ex-girlfriend prior to Burning Man, my confidence was shattered. I felt I couldn’t talk to anyone, my self-confidence had been destroyed and I was heading down a dark path. Since Burning Man, this has now changed, and I emerge from the desert a better person. Black Rock city has given me the platform to thrive, allowing my positive characteristics to shine and be absorbed and supported by those around me. I no longer feel as though I have to hide behind an alternate persona and it’s for that reason Burning Man has had such a positive impact on my life.

I now sit here contemplating not only how I can contribute to Burning Man next year, but to society as a whole. The power of gifting is so rewarding and I want to help others in the same way Burning Man has helped me. My life has changed for the good, and I’m excited about what’s next to come. To the burners I shared my experience with, thank you. 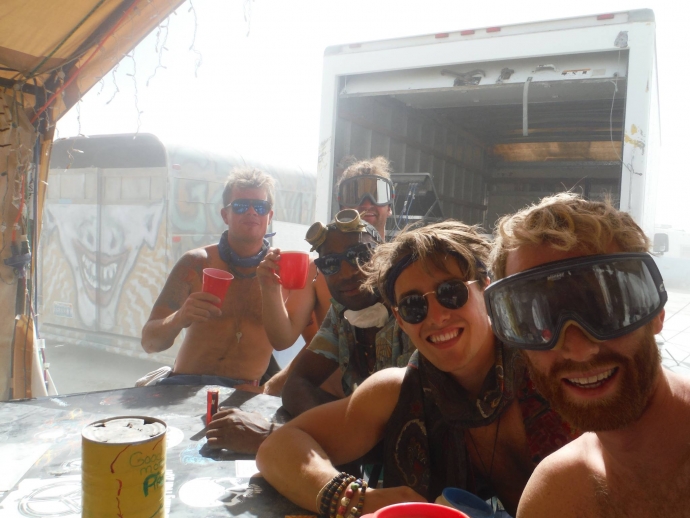