It’s always been a dream of mine to have a proper music festival in my hometown, and last year that dream finally came true as a brand new festival by the name of Grinagog took to the ancient site of Torre Abbey in Torquay to bring a full 3 days of music to the English Riviera. Boom!

Being so close to home, I obviously jumped to get involved in the organisation of the event and therefore had to rope in some new bodies to do the regular festival coverage for the site. Unfortunately the only people available were my dad and my uncle Nigel; a diabetic taxi driver and a bolding energy surveyor from Surrey…….yes we were desperate!

After publishing their review, to a number of complaints – you can read it here – for some reason I decided to give them another stab at this years event and instantly regretted it after reading about a paragraph of the below text I was sent.

I’m basically only printing this to ensure future Birthday and Christmas gifts.

So please enjoy in all its “mostly” unedited, probably incorrect (I’ll reword that…definitely incorrect) and will probably offend someone glory.

Chris: I told you before… it’s Grinagog not Grin at God

I’m Dad, and me and Uncle Nigel and I have been roped in to report on the Grin at God Festival in Torquay again. I had to miss out on the whole of Saturday night due to unforeseen drunkenness. (Not me) But anyway, as I did last year, it’s going to be mostly photos of bands and singers I don’t remember the names of. In some cases I never knew the names, but I’m sure they will recognise themselves (Editor: Good to see you taking this seriously again..FML!) 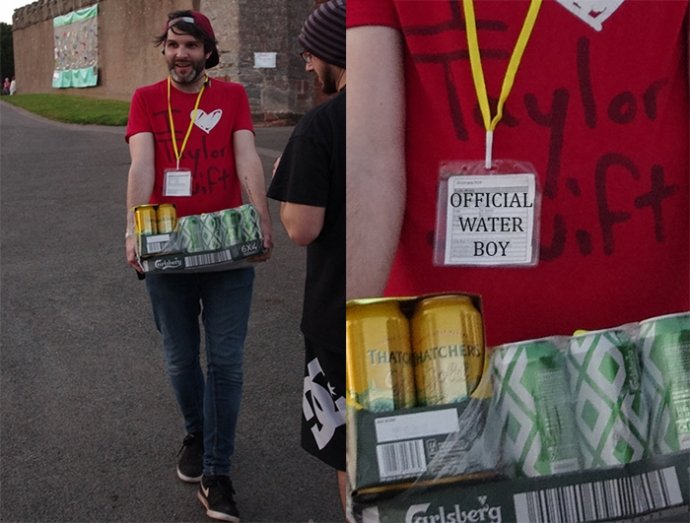 Before I start I would like to put something straight for you all. Now, my son Chris has been claiming that he was in charge of certain stages during the festival. Well the truth is he was the “Water Boy” for the bands, and here’s proof. But, in his defence all the water was vegan and the cans were all made from recycled Canon cameras. 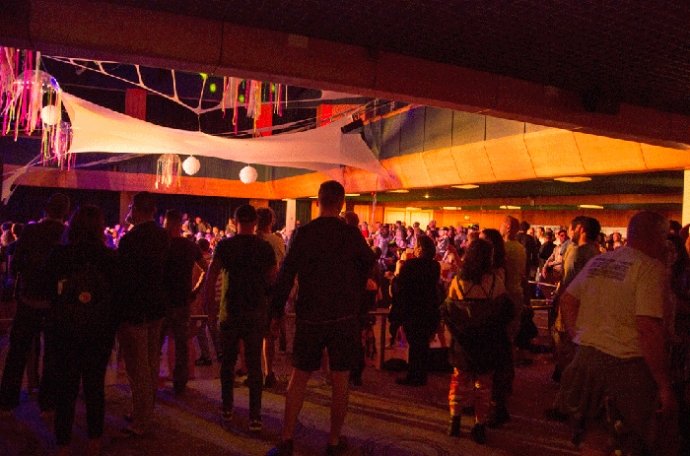 Now I haven’t managed to take so many good photos this year as most of them were taken by the 300+ student photographers and videographers from the local college. Here’s one of the better ones I captured. These are the said photographers waiting for Craig David and Ray Charles; they didn’t turn up btw, more on that later.

Friday night is rock night at Grin at God (Editor: It wasn’t rock night, there was just a rock stage) and this year it was all moved to the Spanish Barn. I looked forward to trying some tapas while I snapped the bands over the heads of the students. No tapas available, so much for it being Spanish then.

Chris: It’s Grinagog, not Grin at God
Dad: Then why the choir?
Chris: What choir?
Dad: This one…

Dad: The lead singer couldn’t come so they had him on FaceTime. It messed up the line-up though.

Dad: I thought it was one of these…

OK, so here’s some photos from rock night (Editor: I repeat, NOT rock night. Just a rock stage. The MOSH stage to be exact!) This first one is Andy (the one in the hat), he hangs around gigs hoping one of the guitarists doesn’t turn up. His luck was in this year and he got to play with Ocean Sunset View and some guy wearing a traffic cone as a hat. The bassist did have to teach him the chords though. 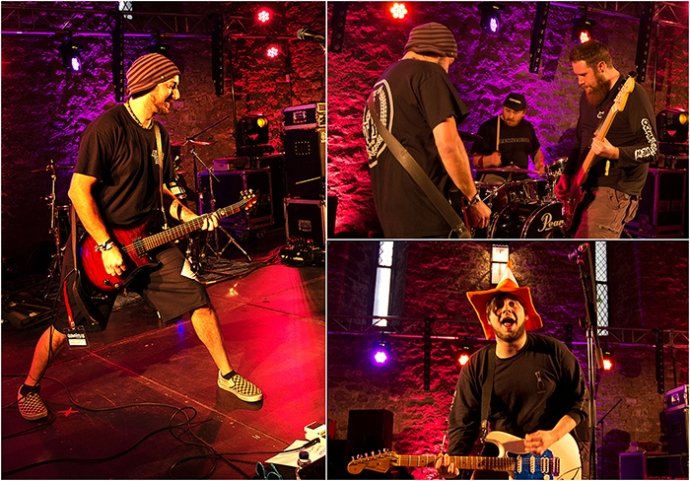 I suppose that hat wasn’t as bad as The Acid Morris men and women. Not Rock but very watchable and funny.

Back inside the barn there are more bands playing including these two. And no I don’t know their names, but I’m sure some of you reading this will. (Editor: Palm Reader & Deadfly) 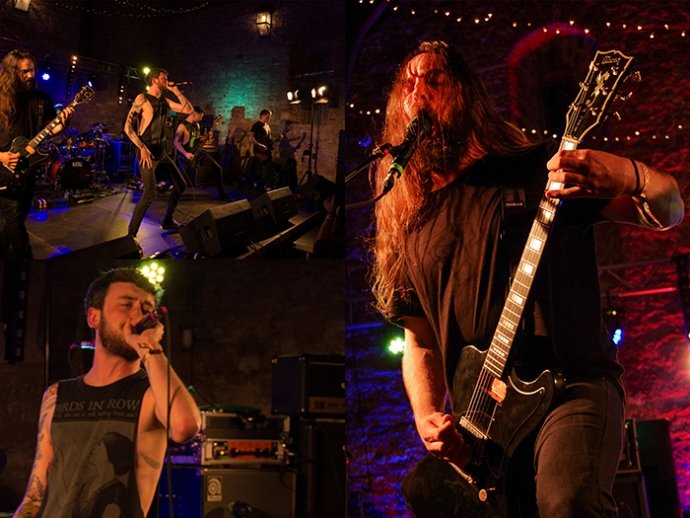 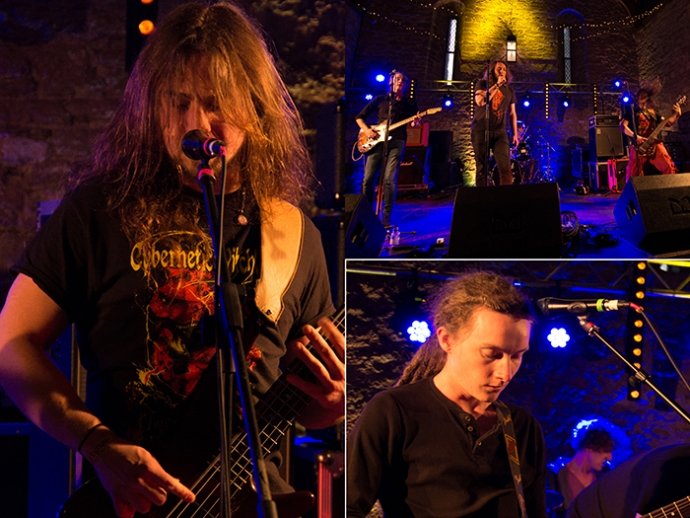 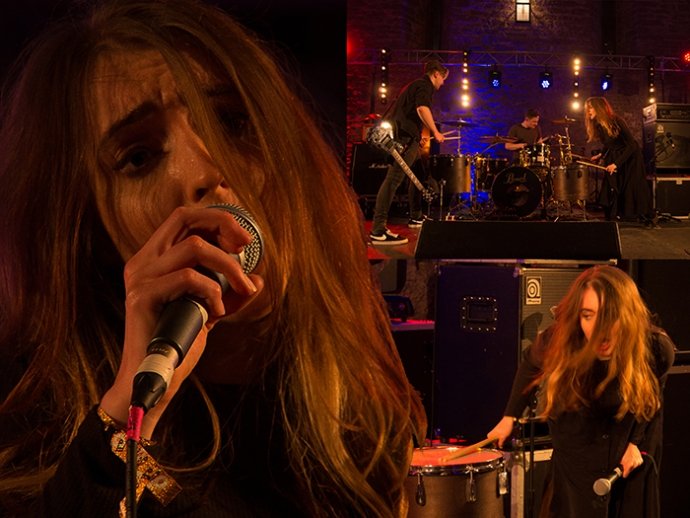 Now she’s good, I think she works for HTF so you’ll all know who she is. Love that voice.

(Editor: Anavae Dad, the band are called Anavae! Did you do any research at all?!)

Meanwhile up on the big stage in the RIIC ,a Big sound and an even bigger trumpet type thingy. 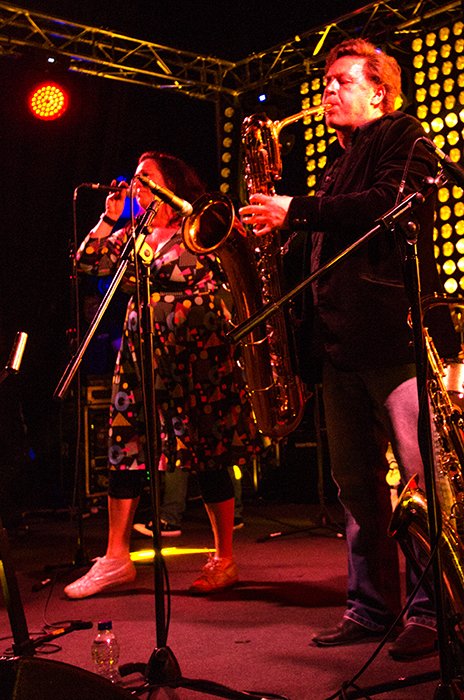 Now we get to the start of the big names on the main stage. The crowd is desperately trying to see past the 300+ student photographers that are still up way past their bedtimes at 9 o’clock, but we are all eagerly awaiting the arrival of Craig David and Ray Charles. Much to everyone’s surprise up pops Dave Lister from Red Dwarf aka Craig Charles. Apparently Dave, oops sorry, Craig is also a DJ and loves his funk and soul. Not a good photo as the light wasn’t actually falling on him. I think the only good photo will come from the official Grinagog photographer who was on stage in his face, and had a flash. 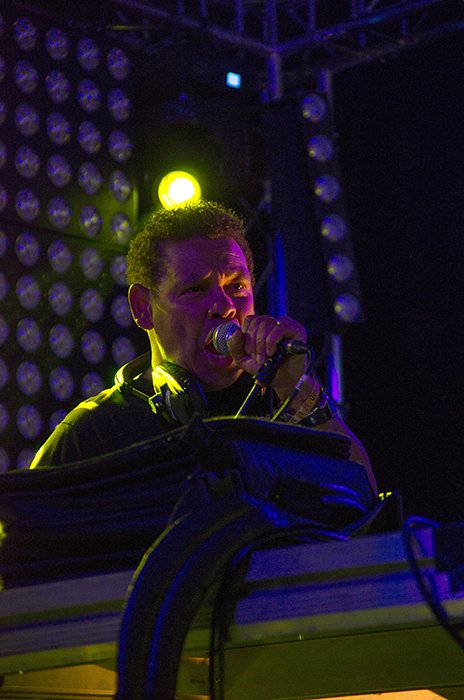 That’s it for Friday, I had an early start at work on Saturday so missed the rock stage headliners.

Saturday looms large with lots to look forward to but unfortunately my day was cut short so not much in the way of music photos today. I’ve got some more of the non music side of the festival instead. Now this guy and his mates went a bit OTT when dressing up as a hi-vis security staff. 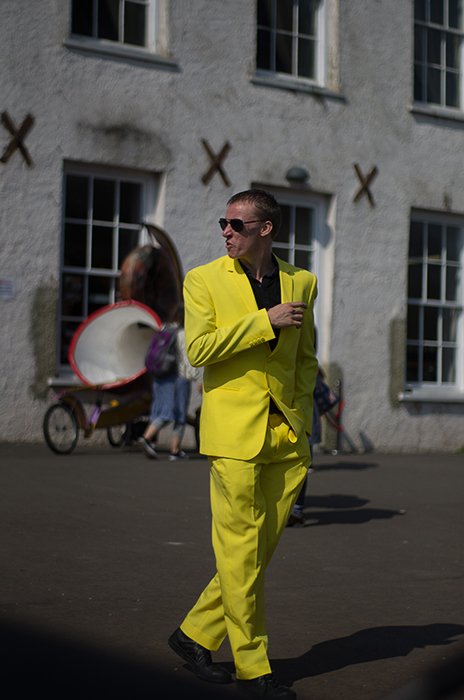 Uncle Nigel went looking for the weird and unusual with his phone and he managed to find a Flea Circus (Uncle Tacko’s), obviously one of the major festival acts.

Another unusual sight was the flame throwing mechanical horse. I didn’t get to see it flame, but did get this shot.

Nigel was able to catch some of the evening headliners including a rather unpleasant guy by the name of Mr Nasty. But first here’s some other people… 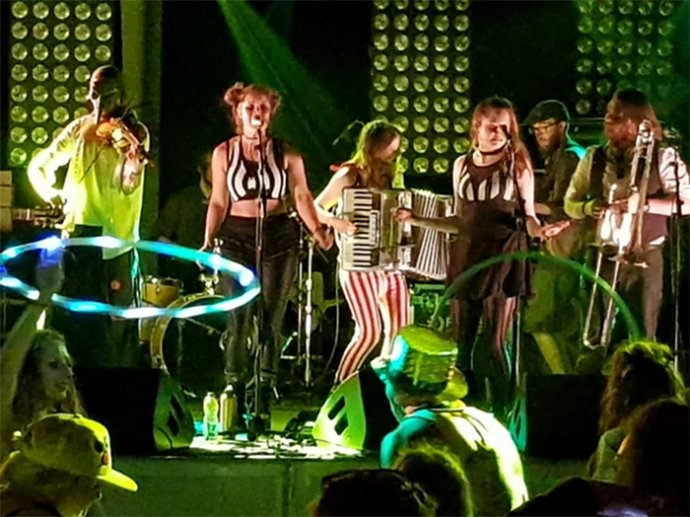 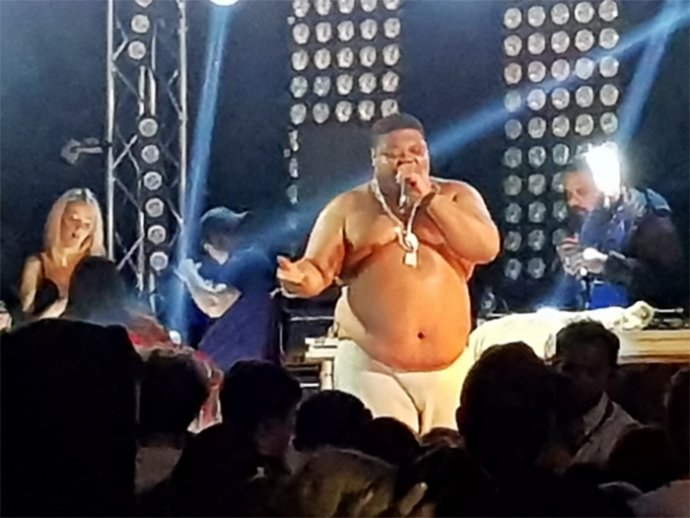 OK, my bad. Anyway if he’s the headliner why can’t he afford a shirt?

Sunday morning and I’m looking forward to a rest. Last years Sunday was so laid back I thought it had died. Expecting much the same this year, I added an extra lens to my bag so I could sit on a bench and just zoom in to anything I saw that might be interesting. Uncle Nigel had finally worked out how to use his phone camera last night so was raring to go. As we had arrived in time for lunch we had a look around to see what was on offer.

Now I don’t normally like to say I was right, but here goes. I said it was the “Grin at God festival” and what do I find…. but a sign to Heaven. 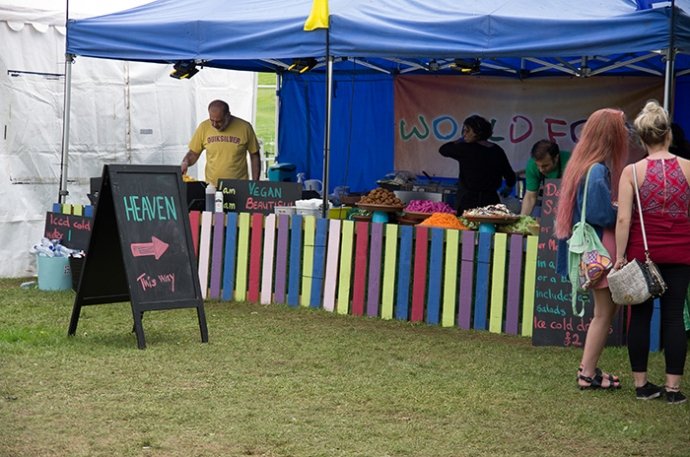 So I went up and gave them my best grin. They all looked at me as if I was insane. Then I realised it was a Vegan heaven, no smiling there then. And no bacon butties either. So we went next door and bought some chips fried in vegetable oil and coated with herbs, much better. (Editor: So you went for the other vegan option then…..interesting!)

As I was only really interested in photographing bands and such, we headed for the Spanish Barn to watch Bert Miller & the Animal Folk. It turned out to be another bunch of vegans, christ they’re getting everywhere.

Anyway, here’s some photos of them. From top left clockwise. Bert Miller singing about saving wasps whilst doing an impression of Gareth Bale, two guitarists wondering WTF is going on, two band members getting in on the impression game as Zaphod Beeblebrox, and finally Bert is realising that if he can’t talk to his dog how can he talk to wasps. 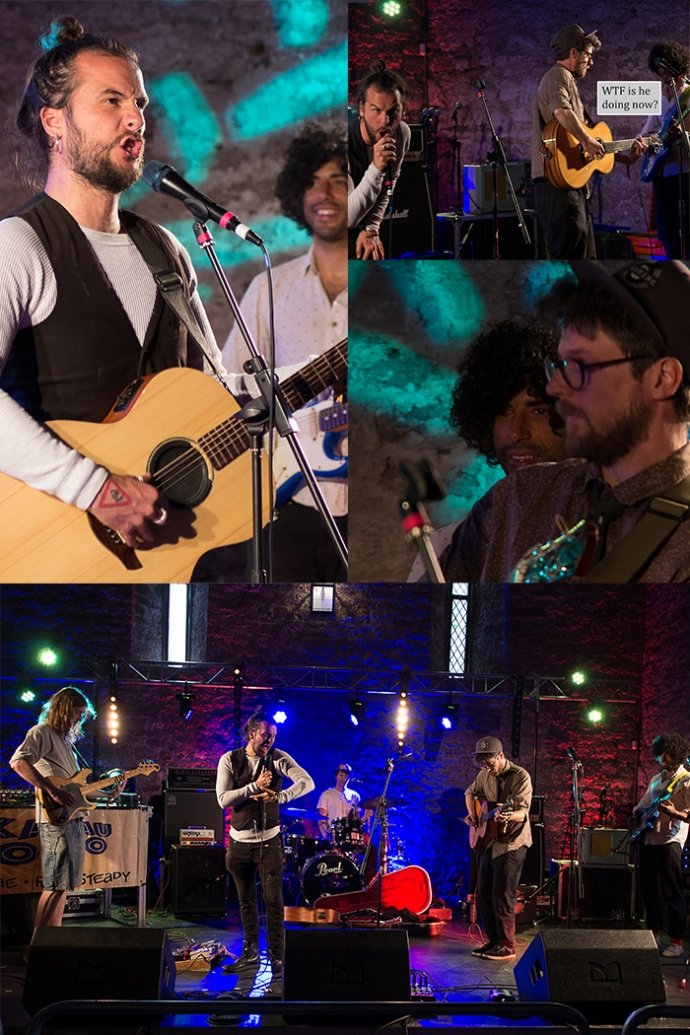 The funniest band of the weekend even though they should probably get psychiatric treatment; and that’s just for being vegans.

Musically my day ended with the Cut Capers, not vegan as far as I know. Now you might remember me saying earlier that as it was Sunday it would be nice and restful; not with the Cut Capers around it isn’t. A mix of hiphop and swing had the crowd jumping, which isn’t healthy on a Sunday afternoon I can tell you. A band to look out for if you like to party.

I ended the day at the Sunday Papers Live Earth Day Debate, which of course included yet another vegan…..Chris. But the thought that filled my head at the end of the discussion was this “What have Greenpeace done to deserve a T-shirt like this” 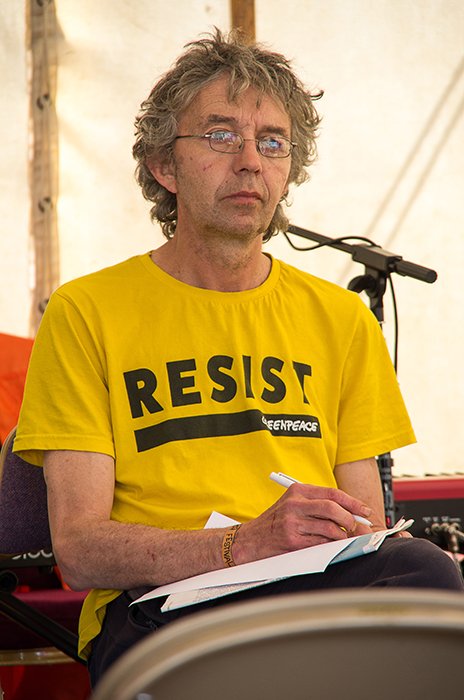 Greenpeace were always an organisation that we supported. What did they do that we should resist?

Anyway, Chris wants a summary so you know what I thought so here goes….

It was great, plenty for everyone, even those that don’t like music. I saw young kids running around with smiles on their faces and old farts like me watching lunatic vegans singing about wasps. What’s not to like?

See you all at next years festival, whatever they call it.