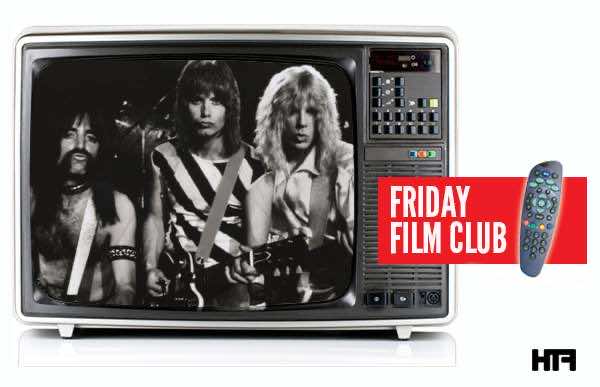 Hit The Floor is your premiere online zine for all that is music, film, and fashion. We live and breathe these things and so when we have the chance to pass on our personal favourites to you, we love it. What more can we say other than tonight’s Friday Film Club is such a special one. GIving you the best of music, film, and some questionable fashion is ‘This Is Spinal Tap’ ITV4 11:30pm.

Spinal Tap are the 80s heavy metal band that everyone wanted to see, but no one could. Based on a fictional band, ‘This Is Spinal Tap’ is the documentary, or rockumentary of you will, with a satirical look on the rock and roll lifestyle. A mock-rock-doc on the pitfalls, downfalls, and stagefalls of a dying breed.

The story follows director Marti DeBergi (Rob Reiner) as he covers the band’s North American tour and album release. Finding out what is truly behind these out of luck Englishmen as they realise the failing popularity of 80s metal.

This film is a joy to behold. Its crashing heavy soundtrack (all played by the actors), its crazy disasters, its huge amount of confusion. “It’s not your job to be as confused as Nigel is.” All spear headed by three great comedians will appalling British accents: Michael McKean, Christopher Guest, and Harry Shearer.

‘This Is Spinal Tap’ is such a funny film that even the rubbish English accents are acceptable. It is full of re-quotable, re-watchable, epic scenes of hilarity, from the band getting lost backstage, to picking up air traffic control on a radio mic, to having a “Stonehenge monument on the stage that was in danger of being crushed by a dwarf!”

Its intimacy with the music record world, including cameos from major players, and the characters’ struggle to survive in an overwhelming sea of modern music makes you feel sorry for these rockstar millionaires. A type of sympathy one could only have for a small helpless animal, like a dog with wheels for legs.

Watch this film. It’s brilliant execution and endless improvisation is some of the best out there. It is a true honour just to be able to feature it as this week’s Friday Film Club recommendation.