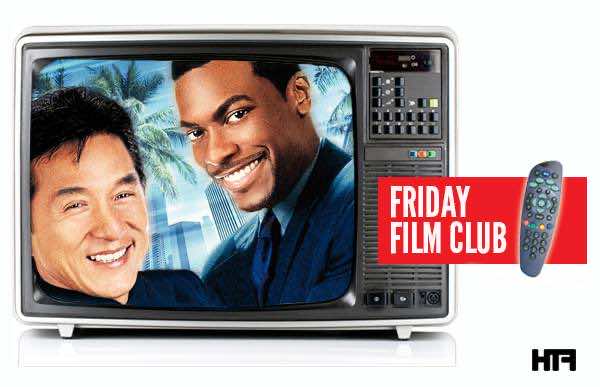 Come one, come all to the Friday Film Club. HTF’s top advice on what you should be doing this Friday night (other than partying, socialising, having a life, etc.). We’re always banging on about cool new films to watch. Trying to open the minds of our readers and appreciate film more, but not this week. Tonight we’re just going to sit back, eat pizza, and watch people falling over.

Receiving an honourable mention this evening is ‘The Running Man’ Film4 11.15pm. Filled with Arnie one liners and excessive game show murders (Hunger Games eat your heart out) it makes a mockery of the Stephen King book it was based on. For our main event however, we’ll be going back into our childhoods with inter-racial buddy movie classic ‘Rush Hour’ 5* 9pm.

Jackie Chan is truly amazing. A premiere in stunt choreography and cross country immersion with stand up fights and fall down comedy. But he’s been doing his thing for almost 40 years. How do you modernise that? Add a sassy black man. (This was the 90s remember)

Chan stars as fish out of water, Chief Inspector Lee. Hailing from Hong Kong, Lee is brought over to Los Angeles after a diplomat’s daughter is kidnapped by a Triad gang. Tasked with looking after the man, or keeping him occupied, is loud mouth comedian Chris Tucker. An inspiring odd couple buddy movie, east and west must learn from one another to defeat evil using fists, guns, and karaoke.

Coupling this with the great pairing of officious Chan and Cocky Tucker, it adds another dimension to just throwing people through walls. The development of a relationship between the two brings a heart warming side to the police work focused duo in a microcosm of foreign relations, even if their ideas of policing are completely different.

With some amazing set pieces, boundary breaking intercontinental relations, and the infamous rendition of Edwin Starr’s ‘War’, ‘Rush Hour’ is deservedly the pick for this Friday night.

“Do you understand the words that are coming out of my mouth?”