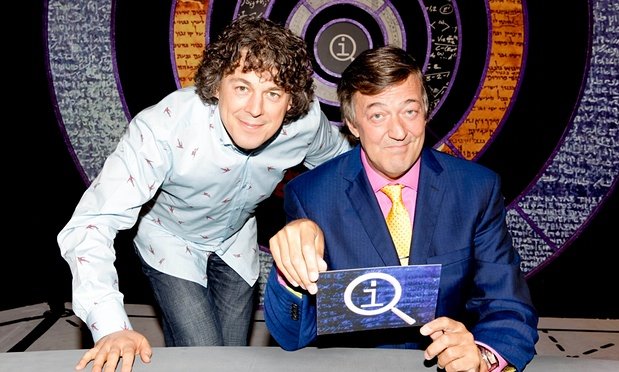 After hearing that Stephen Fry was leaving QI we asked ourselves, what’s the point in living. The BBC 2 program gave us factual and comical entertainment like nobody else for the past 13 years of our lives.

Very touched by all your kind thoughts about QI. Leaving it in the best possible hands. Follow @qikipedia for eternal delight xx

Immediately after the news of his departure we were informed that regular guest Sandi Toksvig will be the new QI teacher.

And today's quite interesting news is that I've been announced as the new presenter of Qi. My dream telly job and I have huge shoes to fill

We then started to worry about Fry’s trusty sidekick Alan Davis. How will he cope with that separation from Fry? What are his thoughts on his new partner Sandi? In typical Davis fashion, he reacted with a witty tweet.

What's happening? A Dane you say?We'll all have pastries and jumpers and it'll be shot in black & white. Bye @stephenfry you did very well x

Instead of mourning a loss we felt it was only right to celebrate the times we had with each other with a collection of our favourite facts from Stephen’s reign.

QI is most famous for it’s brutal point deduction to general ignorance; how the simplest fact you thought you knew was completely wrong. Alan would serve as the people’s champion and say what everyone at home was thinking.

Are you hungry for more facts? Well, have you ever wondered what is the difference between a cake and a biscuit?

Now when you make people a cup of tea and offer them some biscuits or a slice of cake, you can tell them the difference between these two sweet snacks as they tuck in.

That was some food for thought. We now venture on through the land of QI facts. Our next favourite fact, or facts, surround Alan Davis’ obsession with the Blue Whale.

A blue whale question grabs the emotions of all QI fans. If Alan gets the question wrong we all feel the disappointment, but there’s nothing more satisfying than seeing him getting it right.

We seem to forget that Davis and Fry aren’t the only stars of the show. Every week comedians or people of interest join the duo and, as a result, we’ve seen some fantastic telly vision. One of our favourite guests is David Mitchell with his infamous angry logic.

With facts such as: You Should Never Clean A Teapot, Fish Eyes, How To Save A Dying Bee, David brings logic to the madness of the world. The video above might not be straight facts, but you definitely learn something from David Mitchell’s hypothetical rants.

Probably the biggest mind-boggling fact is that most of QI’s facts are not facts anymore. As the video below explains, the older the fact the more likely it’s not true.

With that logic, Stephen has been unintentionally lying to us for the past 13 years.

Thanks to QI we’ve looked like the smartest person in the room at parties and filled with joy as TV’s favourite couple (Alan and Stephen) have dedicated the last decade of their lives to making us all laugh and learn something in the process. And with the replacement of Sandi, we’re sure there will be plenty of laughs and facts to come.