If Only They Had Cast Cumberbatch: Could Benedict Cumberbatch Save Your Film?
Advertisement

Actors Who Could Give Zoolander A Run For His Money

Unretouched Photos Of Beyoncé's L'Oreal Adverts Have Been Leaked

Adam Dutkiewicz Of Killswitch Engage Wins The Price Is Right - What A Legend!

Recently our beloved Benedict Cumberbatch has been having some bad press regarding the wrong word for African Americans. But really? Was using the wrong PC word during a speech that encouraged more acting breaks for ethnic minorities newsworthy? Surely not. He should be praised for standing up for other actors.

If I was writing a feature film script, I’d most certainly want Cumberbatch. He has just had Oscar nomination for best actor for The Imitation Game, as well as various Bafta and Golden Globe nominations in the past. He’s in one of the most successful BBC shows in recently history with Sherlock and the man always puts in a performance. Although he may slightly resemble an otter and he has had a rather privileged life, these are not reasons to mock He simply radiates charisma and diversity; even when he is in crap like The Fifth Estate.

So which films from last year could have done with having a bit of the BC treatment? 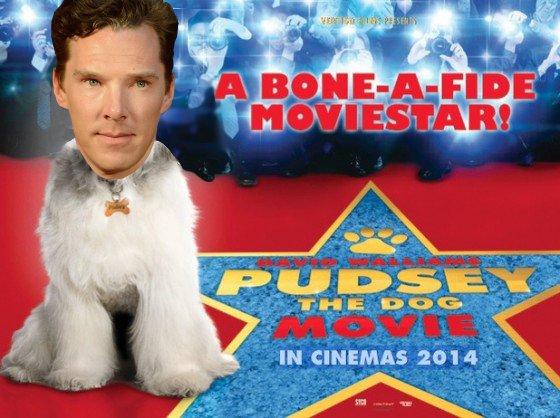 If there was anyone who could pull off Britain’s favourite canine it would be Cumberbatch. He is sheer pedigree and would be able to do more than just dance creepily with his master. Just recently he has proved that he can embody a dragon Smaug in The Hobbit. So a dancing dog…easy.

How this film would have been improved if Cumberbatch could use his experience in Danny Boyle’s stage version of the Mary Shelley classic. He’s already won an Oliver Award for playing the monster and the title character Dr Frankenstein, for heavens sake. So surely he’d transform this sub Underworld rip-off into something at least watchable.

This could possibly be the worst film of last year. Hardly anyone has gone to see the Christian propaganda movie about the rapture. Imagine This Is The End, without the A list cast, any jokes and Nicholas Cage flying a plane. Winner.

So what if Cage actually had a decent foil to play against other than a bunch of  TV movie regulars? Bring in BC, even his initials are reminiscent of the Bible days . It all makes sense and maybe the film would actually not be eye-bleedingly terrible. If anyone can help Cage land a plane during the reckoning it’s Mr Benedict Cumberbatch. Hallelujah!

Could this be the worst comedy in living history? Maybe a little bit harsh as surely it has a mass appeal audience, but this has to be such a lazy tie in that surely Brendan O’Carroll’s relatives had to lie through their teeth to say they had a corking time with this film. If only it was Mrs Cumberbatch’s Boys. He can most certainly handle an accent, though we’ve yet to see him in drag. He did goto Harrow and if there is one thing a boarding school education gives, it’s that dressing up as a lady is hilarious. So we would be in safe hands for sure and anyone who has seen his various candid interviews on the Graham Norton Show and his photo bombing exploits at the Oscars, knows that this man can do comedy.

This is underlying proof of the talents behind Benedict Cumberbatch. If you are making a movie, TV show or even a school play. Think…. does it have a role for BC? He is so magnificent he’d even make a great Maleficent. Good luck at the Oscars BC, although surely it’s already in the bag.

In this article:Benedict Cumberbatch, Film/Tv