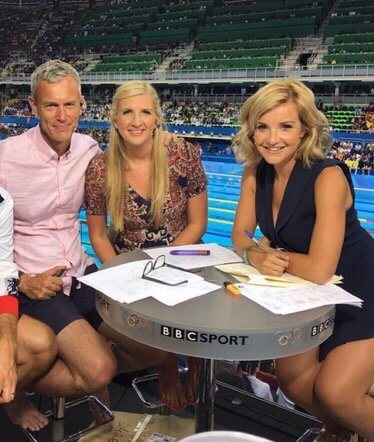 Apparently the Olympics is no longer the world’s greatest sporting spectacle, but a chance for couch potatoes to give their opinion on the fashion choices that presenters make. Yes, I’m referring to the social storm that was created by a dress that Helen Skelton wore when she covered swimming in Rio.

You’d think that everyone would be more interested in the worldwide competition that only gets held every four years, but no. Catching a glimpse of Skelton’s legs (I know, crazy right?) clearly had everyone shocked. Because how dare someone show their skin in the humid heat of Brazil?! That’s definitely more important than her role as a journalist.

Nothing screams ‘sexism’ more than caring about what a woman is wearing instead of paying attention to her journalistic expertise and interviewing skills, not to mention the fact that her co-host Mark Forster also had his legs on show – shall we all scream and shout about that? Or the fact that she was covering swimming, a sport that naturally involves wearing very little, yet there was no objectification when it came to them. We’re all people and we all have skin, and it’s surprising that this has come as a shock to some people.

Surely there’s more to focus on than the fashion choices of those presenting or competing, and there’s a lot more judgement to be passed on people that comment than there is on Skelton herself. If anything we should be applauding her dress sense; not everyone can pull off a vibrant dress in that heat without looking like a dishevelled mess.

Skelton is a talented journalist who has made an impressive career for herself, and as far as I’m aware that’s not something to degrade or shame. She has worked extremely hard to get to where she is today, and she certainly didn’t put all that work in just for the sake of falling into the patriarchal system or so that small-minded people could comment on her clothing.

Now back to the Olympics for the actual sports because, you know, that’s what it’s all about. Not image, not clothing and certainly not utilising it to pass off sexism and objectification.