Unless you’ve been hiding under a rock for the last 24 hours, you’ll be well aware that, in the early hours of this morning, Kim Kardashian was robbed at gunpoint while alone in her luxury apartment in Paris. While no official word has come from Kim on the matter, it has been alleged that over $10 million worth of precious jewellery was taken by the armed robbers, along with two mobile phones.

The press has swooped in on the story and, in the last 12 hours, it’s been impossible to avoid the news across any media channels. Naturally, then, people have had a lot to say on the matter. Millions of people have rallied in their support for Kim, with many of them sending her their kind wishes through social media. 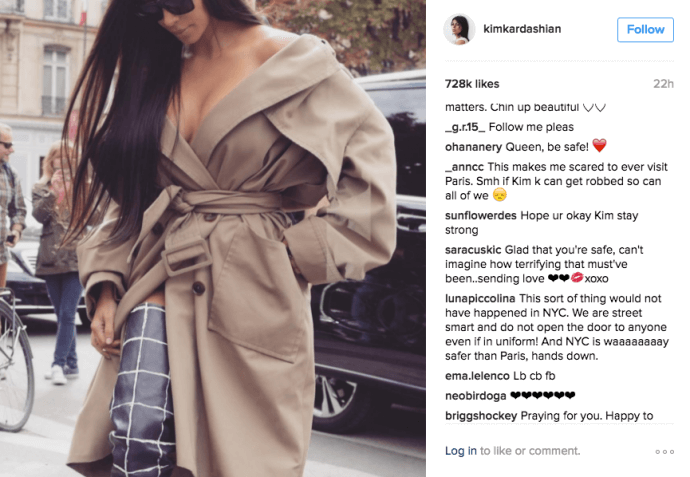 Other celebrities – including Piers Morgan, James Corden and Kim’s pal Chrissy Teigen – have taken to Twitter to show their support. Corden was quick to remind everyone that, on this occasion, it is far better to take the high road and simply view Kim Kardashian-West as a human being, not a mindless object of ridicule – earlier, he tweeted: “People making jokes about @KimKardashian tonight would do well to remember that she’s a mother,a daughter,a wife,a friend.Be nice or shut up [sic].”

Ever heard of Anton Newcombe? From The Brian Jonestown Massacre? Us neither but, anyway, he obviously sees himself as such a poster-boy for righteousness that he took it upon himself to respond to Corden’s tweet by posting some uncomfortable, guilt-inducing pictures of starving children. This was followed by some cheery stats on the struggling victims of the 2010 Haiti earthquake. When challenged by a fellow Twitter user as to how, exactly, these horrific events have anything to do with Kim K’s own horrific event, he replied that Kim was a “disgusting self obsessed cow [sic].”

Interestingly, Newcombe’s bio proclaims that he is both a husband and a father. You would have thought that, as a parent, he would have a little bit more sympathy for Kim, who has two kids and a husband at home, not to mention an extensive list of family members. Could we also just take a moment to shake our heads at this guy calling someone else self-obsessed when A) earlier today he actually boasted that he had ’35 times’ more Twitter followers than someone else, and B) he is a bloody musician, ergo self-obsessed by nature.

One can always rely on the internet to encourage the dregs of society to crawl out of the woodwork. Never mind that Kim is a mother, a wife, a sister, an aunt, a cousin, a friend. Never mind that Kim was on the cover of Forbes this summer because her mobile game has generated $160+ million since its 2014 launch. Never mind any of Kim’s successes because, at the end of the day, she has a “fake ass”, a “sex tape” and an “egohead of a husband,” (according to Twitter user Amanda Windsor/@shoegal1927), and that means she deserves to have strangers break into her rented home and, allegedly, tape her mouth shut and threaten her with a gun. 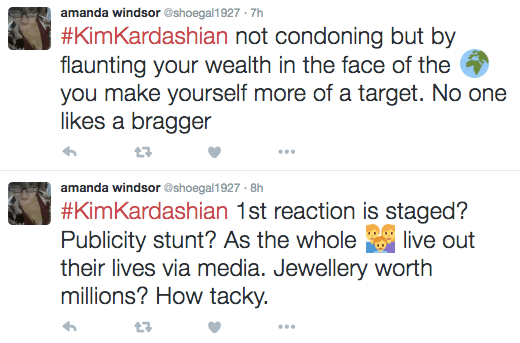 Many of charm school rejects have logged on to Twitter to post comments in bad taste regarding Kim’s ordeal. Some people are apparently pleased she’s been robbed because she’s rich, pretty and privileged, and therefore deserves it; others actually think it’s all part of an elaborate insurance scam.

Have these people considered careers with the insurance fraud bureau? Insurance fraud claims from a woman who has earnt around $53 million in the last 12 months… here at the Hit the Floor network, we’re kicking ourselves that we didn’t think of it first. Kanye is in debt, after all.

Freedom of speech is important. Natural disasters and poverty are, of course, pressing issues that we all should be concerned about. But complaining Kim Kardashian’s Parisian disaster all over the media isn’t cool. Just imagine if this happened to you or one of your loved ones – you’d be devastated, shook up and you certainly wouldn’t want someone you don’t even know writing horrible things about you on the internet. Money and fame aside, look at the situation at its bare bones: in the early hours of the morning a mother and wife, beloved to many, had her life threatened and her personal possessions taken. Have a little heart. 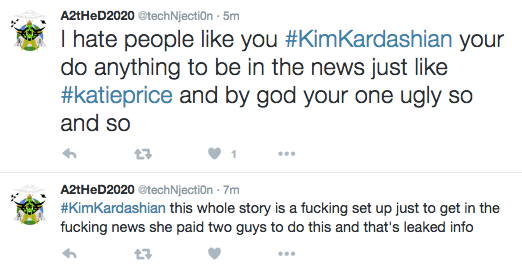 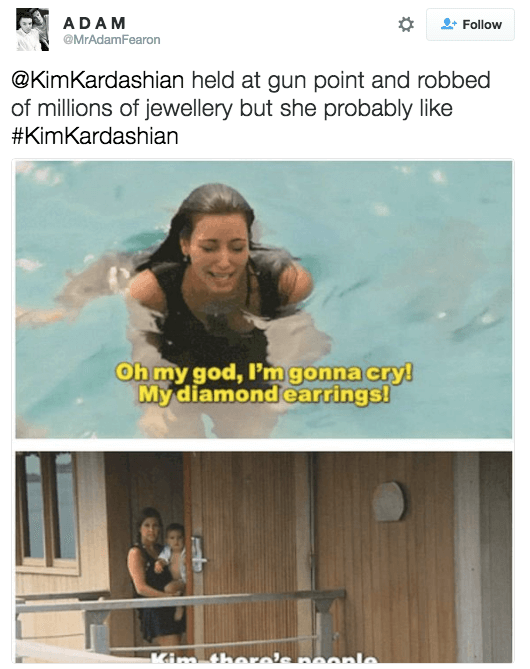 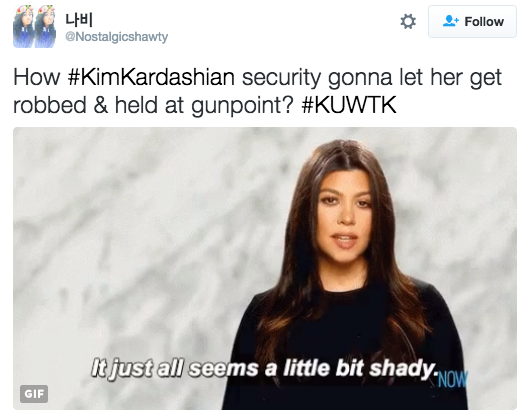 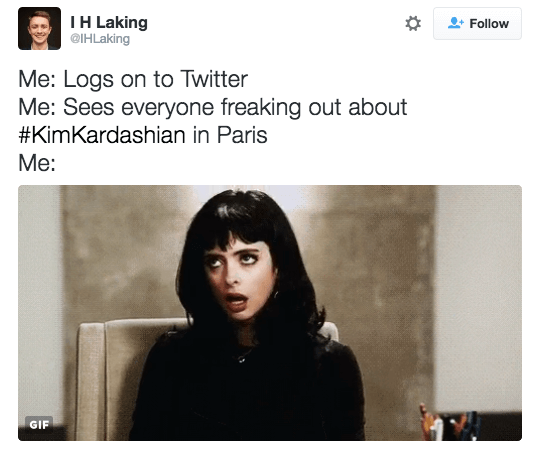