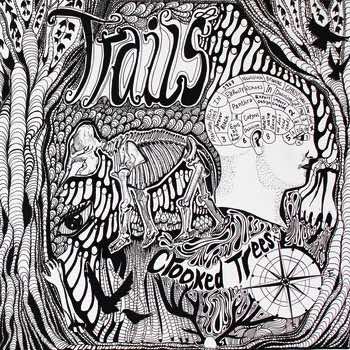 Listen up music fans, because Surrey noisemakers Trails have just joined the UK rock music revolution. Bands like Mallory Knox, Don Broco, Neck Deep, Lonely The Brave and a whole host of others have been working hard to fly the flag for great, alternative British music this year and now, we at Hit The Floor have another name for you lot to shout about. After touring the UK and Europe relentlessly for the past two years, the Guildford-based quartet have released their debut album ‘Crooked Trees’. Following in the footsteps of two self-funded EP’s, Trails have stuck to the DIY route and funded the album through the medium of fan support and Kickstarter. In the age of Spotify, piracy and illegal downloads, that takes some serious faith and determination.

Musically speaking, Trails are known for being somewhat experimental. Dipping in and out of different genres and taking inspiration from a wide range of influences, their music is a bold melting pot of sounds and styles. Think of listening to Trails as going out for dinner to one of those all you can eat buffets. You can’t choose between the Mexican and the Chinese, so you have both. You don’t even feel guilty. Nope, in fact, you feel pretty satisfied. In ‘Crooked Trees’, Trails have provided us with an in-depth lesson in how to have your musical cake and eat it too.

Experimental, post-hardcore tinged tracks such as ‘Where We’re Going, We Don’t Need Roads’, ‘Egos At The Door’ and ‘1967′ provide the listener with viciously energetic guitar hooks and mighty screams, whilst tracks such as ‘Forever Black’ and ‘Echoes In Eternity’ possess an infinitely more punk-rock attitude. The album showcases frenetic drumming, technical hooks, interesting melodies and for the most part, utterly catchy choruses. The vocals span a vast spectrum: brutal screams reminiscent of Polar are followed by punchy, punk-driven choruses. Some tracks even exhibit a vocal style which is just a little reminiscent of Rob Damiani’s British lad-pop lilt; albeit much grittier.

Trying to pin Trails’ sound down is a little like trying to use a chocolate tea pot to brew a cuppa, but really, that’s the beauty of the band. The glue of this album can be found in Trails’ ability to write deliciously catchy songs; bringing together the very best elements of genres that inspire them musically to create a completely unique sound of their own. Ultimately, a bold and confident debut album that is bound to make waves.