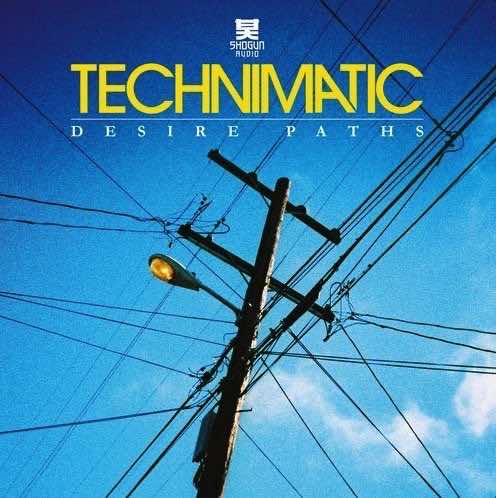 Technimatic have finally dropped their long awaited album ‘Desire Paths‘ to Shogun Audio. The duo, Technicolour & Kromatic, joined forces in 2008, releasing their first track ‘Preacher’. Since then they have gone to release their tracks to some of the biggest labels such as, Critical, Hospital, and SGN:LTD.

Fast forward to now – we see them release their anticipated album, and we have taken an insight on what to expect from the 15 track LP. The album has taken an old school approach building a rich sounds full of horns, strings, pianos, and soulful vocals. Every passing year Shogun Audio have been inching towards the more pop-friendly side of drum and bass music, which gives ‘Desire Paths‘ a good match for the label.

The name of the album ‘Desire Paths‘ came from an idea of a route between an origin and destination, and we felt that the album followed this concept. The feeling that it came across as though they were using the metaphor the journey we have in our lives on day-to-day basis. Treading the standard route in life but striving to get somewhere else we are truly passionate about. The use of calm and soothing drum and bass throughout the first half a dozen tracks gives the idea of the start of journey to the final destination. The last eight tracks gave us the feeling that we were getting closer to the final destination we are truly passionate about, with up tempo liquid drum and bass.

This idea gives the album texture and complexity. ‘Desire Paths‘ had something fresh and current, but lacks the drive that you would expect in most drum and bass tracks. With this in mind, Shogun Audio could have compromised the concept of a more up tempo pace, to put Technimatic on the bench mark of a more pop-friendly direction. The album lacks typical progression to allow the renowned recording to reach the more commercial side of the spectrum, a concept which was seemingly looking to be achieved.

Songs like ‘Like A Memory’, and the more up tempo tracks such as ‘Night Vision’, were immediate standout moments on ‘Desire Paths‘.
‘Like A Memory’ has that commercial edge to its production with the use of soulful vocals by Pat Fulgoni, and background arpeggios that remind us of the old Netsky taken from his first album.
‘Night Vision’ with its punchy percussion, and use of jazz instruments such as trumpets, brings a funky edge compared to many of the tracks on the LP. The change in production and instrumentation within this song, immediately provides with the key standout moment.

In summary, ‘Desire Paths” conceptual idea of progression within life, makes for a fruitful musical journey. A lot of liquid drum and bass give us the idea of progression, but Technimatic have taken the time to apply that to each track, providing for a most substantial listening experience. A great effort from a promising producer!