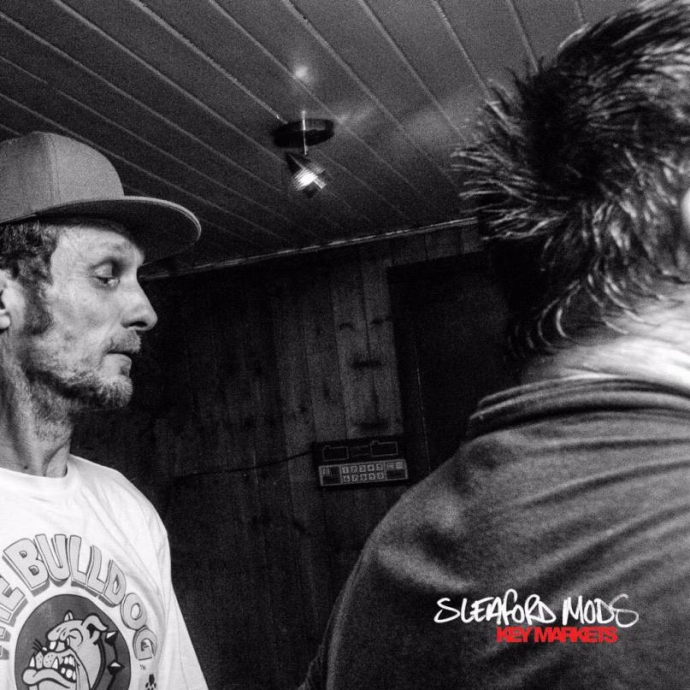 While reading the details of George Osborne’s 2015 budget we gave Sleaford Mods‘ ‘Key Markets’ a listen. What better soundtrack could you want to accompany the news that we’re all a little bit more fucked than we thought? Well, unless you’re happy allowing paper-thin pop chart optimism to lull you into a blissful sense of denial, then Nottingham’s post-punk duo are just about the only group brave enough to speak up about what’s really going on.

Since the breakthrough success of last year’s ‘Divide And Exit’, frontman Jason Williamson has become quite the revered social commentator – an intimidating, balls-on-the-table giver of zero fucks who no rival artist has yet had the guts to square up to. Barking his nihilistic lyrics over the gloomy, industrial beats of producer Andrew Fearn, the duo created a unique hybrid, a sort of post-apocalyptic mutation between Joe Strummer and RZA.

‘Key Markets’ loses none of the pace of its predecessor, first track ‘Live Tonight’ opening with what has rapidly become a signature Andrew Fearn bassline before Jason leaps in, spurting out an erratic, fast-flowing rant with the kind of incoherent humour we’ve come to expect: “I look like the Michillin man, yammed up on antibiotics nanny. Is that your auntie? What ya bring your fuckin’ auntie for?”

Following this we go into the single ‘No One’s Bothered‘. Live gigs and demo’s over the past few months have seen Jason move toward singing some of the lyrics, and here we have the first proper taste of this change in vocal style. Don’t expect a sudden move to sweet melodic choruses, though. It’s still every bit as Sleaford Mods as you would expect – more an extension of the growled syllables than the boys having a go at an R&B slow jam.

The most politically-motivated of the bunch is second single ‘Face To Faces,’ which points the finger at Nick Clegg and Ed Miliband, and although in the time since the recording of the track the pair have vacated their roles as Labour and Lib Dem party leaders, its message has lost none of its potency – “this daylight robbery is now so fucking hateful it’s completely accepted by the vast majority, in chains.” The track’s minimalistic production and incendiary tone makes for probably the hardest hitter of the album.

Altogether ‘Key Markets’ is brilliant. While some might bemoan the duo for a lack of progress from the previous outing, they won’t realise that a deliberate change in style is not what they’re about at all. It works like the latter half of a double album, a continuation of their blunt personification of our country’s strife. Things haven’t got any better since Divide And Exit, therefore Sleaford Mods have had no reason to change their tone.

So if you’re moping about today, slowly letting the dark reality of a Tory Britain sink in, give ‘Key Markets‘ a listen and be thankful that there’s a group processing this mound of shite into verbs.