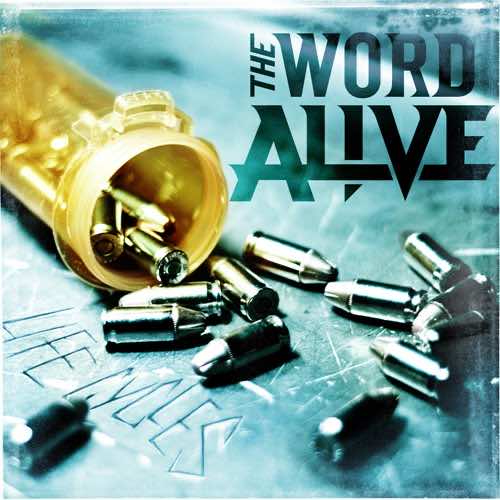 Arizona metal quintet The Word Alive have come a long way in the past few years since the departure of previous vocalist Craig Mabbitt: and on their second release since Tyler Smith (Telle) joined forces with the band. He has shown that he is more than capable of both clean cut singing and screamed vocals. After their performance at this years Slam Dunk Festival the band seem like hot property. They have certainly progressed and moved through with their sound in this new album but have still kept the same fast paced belting riffs and deep dark vocals to please all.

Title track, ‘Life Cycles’, begins with a melodic array of organ playing with Telle then coming in with the lyrics “I’d rather die for what I believe/ Than live life without a meaning”, softly spoken and then screamed with such intensity and emotion that you believe every word he utters. Telle’s vocals have progressed leaps and bounds from previous release ‘Deceiver’ and are more emotionally on point than before although contain the same intensity, urgency and depth as he’s always portrayed.

This album features a balanced mix of vocals with some softer sung parts but yet more emotional screaming, therefore, it shows off Telle’s versatility. ‘Entirety’ displays this perfectly, with catching choruses sung in such a way that you can imagine a crowd singing them back, whilst moving about to the verses that contain your trademark growls. This definitely showcases why this metal core band are at the top of their game right now.

The only thing which perhaps may take some getting used to is the softer beats which feature on some of the tracks. Although they do create a rhythm and will provide perfect opportunities for busting some shapes in the mosh pits. ‘For Your Health’ begins like this, with electro mixed piano beats adorning the first few seconds of the track before everything else kicks in! ‘Ambitionary’ owning the same significance – a heavy hitting tune that capitalizes the bellowing vocals throughout. The guitarists don’t take a back seat, filling each and every song with creative riffs that have more depth than the mere chugging that this genre is famous for.

The band have crafted a release which lives up to the hype surrounding them and when they announce some more live shows this side of the pond, you’d be crazy to not see them.

In this article:Life Cycles, The Word Alive