Support tonight came in the form of American punk rockers The Swellers. Hearing so much hype for these guys over the past twelve months it was inevitable they were going to be good, but they were better beyond belief.

For starters, whoever said punk rock was dead deserves a good slap! These guys are bringing it at you so sharp and so intense it’s unreal to watch. Their modern punk rock sound is as abrupt and ear splitting as any punk band ever has been! They play countless amounts of epic sounding tracks that go down a storm.

They play some tracks from their most recent album ‘Ups and Downsizing‘; it was obvious that ‘Sleeper’ was the best track played from that album as the crowd sang along to every lyric perfectly. Whilst listening to them play some new tracks they seem go down just as well and wrapped up the set tonight superbly.

It was now clear that their new album is going to be in a completely different league; patience is a virtue.

Only once before have I ever seen this venue so packed and tonight definitely topped it. The White Rabbit was completely rammed full of sweaty faces and crushed bodies waiting for a glimpse of their favourite Welsh rockers, The Blackout.

A well arranged and planned out set list is performed to us and older tracks seemed to go down slightly better than their newer stuff. This judgement was made after being flung back and forward repeatedly through tracks such as ‘The Fire’ and ‘Children of the Night’ from their ‘The Best in Town’ album. 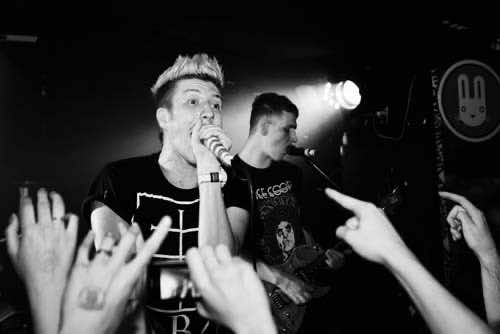 Their newest release ‘Higher and Higher’ was also a clear highlight of the evening; concluding it to be the best track on their newest album ‘Hope’.

The cutest event of the evening was Sean Smith dedicating the preferred track of the night ‘This Is Why We Can’t Have Nice Things’ to his Mother; ‘the best woman in the entire world’, bless.

The Blackout are clearly on to bigger and better things and HTF wish them luck with their newest album release.

In this article:the blackout, the swellers