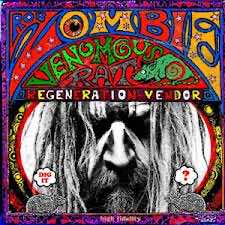 How do you quantify an excellent album? Many look for a depth to the lyrics, inventive songwriting and diversity. Others go for a mix of light and shade and musical ebbs and flows. Where does Rob Zombie fit into all of this? Nowhere. He blasts this notion into the underworld with the help of ‘Venomous Rat Regeneration Vendor’, a dozen of the finest dirty, horror inspired punk n’roll to surface in recent years.

‘Teenage Nosferatu Pussy’ starts the record slowly, an ominous, heavy four minutes laced with doomy riffs and off-kilter keyboards. The pace picks up with first single ‘Dead City Radio And The New Gods Of Supertown‘, bouncing and strutting along like the macabre celebration it was intended to be.

‘Venomous Rat Regeneration Vendor’ is littered with all of Zombie‘s trademarks. His ‘cookie monster’ style drawl contrasts with the enviable musicianship from the rest of his band. It is no coincidence that Zombie‘s output has increased in quality dramatically with the inclusion of former Marilyn Manson men John 5 (guitar) and Ginger Fish (drums), with Piggy D taking the bass position.

The album’s strongest track arrives in the form of the stomping ‘White Trash Freaks’. Fans may not be holding out for another ‘Superbeast’, another ‘Dragula’, but this comes close. A low key verse underpinned by Piggy D‘s bass line bursts into one of the heaviest, grooviest choruses since ‘Living Dead Girl’. ‘We’re An American Band’ continues the celebration,  a positive, uplifting romp, as much as a Rob Zombie track can be, at any rate.

In many ways, the most pleasing thing about the album is the strength in the songs late on. So many albums are front-loaded in an attempt to appeal to the downloading market, leaving weaker material to close the album but the peaks come in the form of tracks like ‘Lucifer Rising’ and ‘The Girl Who Loved The Monsters‘, easily on par with the album’s earlier songs.

This is as much John 5‘s album as it is Rob Zombie‘s. Often the pace is driven by his guitar work and while the songs don’t often allow his virtuoso playing to shine through, the occasional lead line scorches forth, showcasing his ability. With his input and the groove-laced lines from Piggy D, the album struts, exuding a swagger that can only come from an artist who knows his audience, knows his niche, and he delivers effortlessly.

Many feared that Zombie‘s transition into film would herald the end, or at least dilute the quality of his musical career. Fortunately, this is not the case. Where his films have been met with mixed reviews, his aural output during the past five years has been exceptional, and ‘Venomous Rat Regeneration Vendor’ continues his fine form.

Rob Zombie has become a precious commodity, his forays outside the US are rare. A fact upsetting enough in itself only worsened by imagining some of the tracks on Venomous Rat Regeneration Vendor backed by animatronic robots, video and pyrotechnics. Come back soon Rob, we miss you. And bring this album with you.

In this article:Marilyn Manson, Rob Zombie