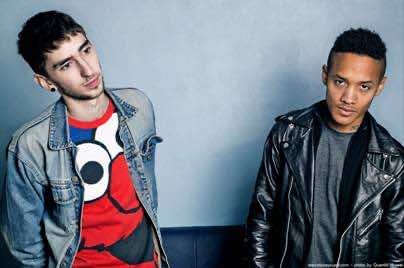 Mickey Cupid is a transatlantic collaboration formed from New York based Marcus Harmon and Matt Nannetti hailing from the cultural hub of Brussels. By joining forces they have created a sound that has put them at the cusp of current alternative chart scene.

Their debut EP, Hey Crazy World contains four tracks that showcase a range of melodic and lyrical ability. Hey Crazy World, the title track of the album, holds a vibrant marching sequence with emphatic falsetto vocals, resonating with sounds symptomatic of the Scissor Sisters. There’s a real rawness to their style that gives them freshness and intrigue. The next track on the EP, Keep It In Disguise has a solid baseline with electronic spiking sounds darting around it. Sultry vocals fold around the sequence as it picks up into an infectious repetitive chorus. There are clear 80s to Mikey Cupid’s style – something that they’ve twisted with many other elements to create something original. 1994 takes the EP to dance territory, with clear 70s disco elements driving the track. Give Me a Chill is another disco track with a delectable funk baseline pulsing through the duration. There also some definite Michael Jackson vocal influences appearing at this point of the EP, showing that Mickey Cupid take credence from some of the greats and pepper it on their own style. Edge of the World has a more current edge to it, with electro instrumentals and a catching chorus which is hard to forget. Percussion sees the track out as it is left with Mickey Cupid’s atmospherically diverse vocals.

Hey Crazy World is a rough edged debut, showing in its purest terms that Mickey Cupid have great potential to create music that salutes past eras with a futuristic vibe.

In this article:hit the floor, review