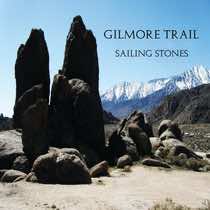 What does one want from an instrumental, post-rock outfit’s first full-length album? How about a totally organic evolution of the fine amount of promise heard on their debut? Sheffield based 4-piece Gilmore Trail have returned to the studio and put together Sailing Stones, the follow-up to their 2011 debut offering Circle of Least Confusion. Expectations may already be high, considering that initial release was nominated “Best EP” by Sheffield Scenester.

At first glance of the Digipak, eco-friendly sleeve (adorned to every last spare millimetre with rocky landscape photography) we observe that for these musicians, continuity reigns. The first disc featured an equal amount of lush green nature shots. No complaints here either. In this age of limited attention spans and media-engine sensationalism , often there is nothing better than a band finding out what they do well and then doing it again for longer next time. It is what truly great rock music ought to be about. There also seems to be a visual to auditory crossover here: how many people who have seen Highlander would find the visuals of that film’s landscapes in their mind’s eye as they listen to Queen’s “Who wants to live forever?”, which was, after all, commissioned for that movie? The music contained on the Sailing Stones disc might well take you into the landscape depicted on the disc.

Gilmore Trail as a name originates from a recommended path used to reach a vantage point for seeing the Northern Lights. The record opens with ‘Fairbanks’, which is more likely a reference to nature than to any speculation over banking reform that has been bandied about since the credit-crunch. One does feel though that playing this track through an outdoor sound installation at the approach to the Gherkin and other Square Mile buildings may inspire a sudden degree of newfound honesty in those who turn the fiscal cogs. The track is a great opener: highly inventive drumming underpins a crisp and well defined electric instrument layout courtesy of the guitar pairing and bass. Like Sigur RÃƒ³s and God is an Astronaut, cited as influences on the band in their online bio and also in such heavier bands as ISIS and Opeth’s mellower turns, there is a pleasing interplay here between the notes’ attack and sustain on the instruments and their embellishments. This extends through the band’s use of lush chorus-effect picking meeting Ebow treated sections (a device that creates endless single note sustain). Gilmore Trail are also not hiding their metal influences here and, like the first release, Sailing Stones has its heavier outbursts, even involving drop-tunings as well.

But there is actually a hint of traditional musics, listen to the beginning of ‘Clouds Over The Valley’ and a timeless sounding major-key tonality chimes through a jolly melody. More ethereal guitar effects adorn ‘Sailing Stones’ itself, the interlude track that forms track 3. Anyone familiar with the band’s live shows will have heard use of a very clever guitar effect used in ‘Talking Tides’ from the first EP. Chords have their heads chopped off, returning as an early echo. More of that here and I promise you, your ears were meant for this stuff and they’ll thank you for sharing it with them. ‘Evening Lake’ is a beautiful track featuring great development, rhythmic changes all stemming from a testimony that arpeggios are king, as Mozart well knew. Very good definition of instrumental voices throughout, the creative use of continuing the music over the CD run-out and run-in blocks between tracks – a feature of much modern metal – and even an intro riff that hints at the jazz confusion outro section of Meshuggah’s monstrously heavy work Catch-33 (FIRES OF ASHEN LIGHT); Gilmore Trail have created a unique sonic blend and an atmosphere all of their own here. Also in the penultimate track (Fires…), listen out for the deliberately off-tempo, beat-pushing sound halfway in that resembles a splash cymbal in the background. This was actually a rimshot blended with tambourine, both receiving heavy reverb. The closing track like the first gives us the full gamut of the ‘Trail’s arrangement ethos, or as they describe it, their “sonic reach”. What struck this reviewer was that when the track eventually hits all-out distorted rock, it is still a beautiful E-bow’d melody figure that has the last say. May the brave new sound world continue.

In this article:God is an Astronaut, Sigur Ros