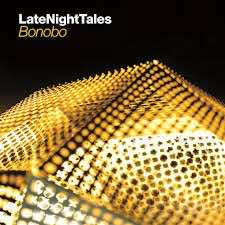 When I ever imagine meeting my favourite artists I always like to suppose that we would get on like a house on fire. Kindred spirits with so much in common that hot daym Bon Iver how’s about we just get married right now and move to that little wooden cabin of yours. Well judging by the recent outpouring from Late Night Tales, mixtape masters that invite the worlds best musicians to open their record bag, Bonobo and I would get on very well.

Late Night Tales is all about the feel – those tracks that bring on the night time and light up your darkness. Bonobo’s selections are simply flawless. Simon Green knows his onions and is a sublime DJ as well as an amazing producer. His Late night Tales is more than just a mixtape – it’s an education in music. The album opens with ‘An Ending A Beginning’ a poignantly simple and beautiful start provided by American pianist Dustin O’Halloran. For fear of this review becoming a track-by-track love letter to Mr Green, I’ll only briefly mention the second track, a heart melting beauty ‘A Calf Born In Winter’ by Khruangbin. It’s clear from the first two tracks that this is going to be a journey that will not disappoint.

Saying that a mixtape can expand your mind is maybe a tad romantic, but in this case, one would be hard pressed to disagree. From greats like Nina Simone and Bill Evans to relatively unknowns such as Romare and Andrew Ashong, the 21 track mix is made with as much love as it elicits. Andrew Ashong’s ‘Flowers’ shows that Simon still knows his stuff when it comes to the newbies. The strongly percussive, repetitive track has a bassline and melody that will pritt stick to your memory, and with high commendation from Gilles Peterson and Theo Parrish, you’d be in good company to save him to your favourties. If you want a one to watch for 2014, I’d keep close tabs on Mr Ashong, if you know what’s good for you.

Now, it wouldn’t be a Bonobo mix without a good few bits of brass thrown in and the Hypnotic Brass Ensemble and Menehan Street Band both provide that blast. But not scared to dip his toe in the bubbling broth of electronic music either, Late Night Tales sees appearances from Shlomo, Airhead, Lapalux, Floating Points and Romare – all putting down sexified rhythms and flows ready for when that late night gets a little steamy.

That said, one can’t ignore some of the sheer gems that gleam out of this mixtape, ‘Sailing Out To Sea’ by Matthew Halsall will bring even the most stoney faced folk to tears, a strings-driven orchestral piece that gushes into your soul and out again. Similarly, hearing Dorothy Ashby play out will make any jazz-nerd positively self-implode. The little known jazz harpist’s tune ‘Esssence of Saphire’ is a perfect example of how even one brief exposure to Late Night Tales will broaden your musical outlook exponentially. The only little question mark is the arrival of ‘One Thing’, an Amerie cover by Peter & Kerry. Though a beautiful tune in itself and an ingenious cover, it’s penultimate position on the album seems a little odd, but maybe I’m that jazz nerd I just mentioned…

Nerdy tendencies aside, Bonobo ends the affair the only way a musician should – with the stunning ‘Peace Piece’ by the greatest ever jazz pianist Bill Evans. The light touches, the heart break chord sequences and the melancholic yet somewhat uplifting final phrase lets you end your journey on a cloud of audio dreams, ready to enter your own Late Night Tale.