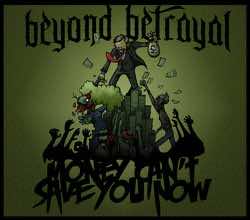 Northern guns Beyond Betrayal have certainly been taking influence from Steel City’s finest Bring Me The Horizon alongside Aussie favourites Parkway Drive. Their brand of metal/hardcore kept them touring for the first few years of band life where they established a name for themselves up in their homelands.

Last year though two of the founding members left and instead of letting it beat them, Beyond Betrayal rebranded themselves: recruiting a new frontman – Vincent – and a new riff master – Tom. They then wrote and recorded this monster of an EP to prove that it wasn’t the end of the band.

‘November’ kicks off proceedings with bottled intensity which leaps out to punch your ear drums from the second your speakers kick in. The rhythmic beats of the bass by Arron Twinney and the drumming by Jake Newton provide a battering ram to the ears, which accompanied by the twin guitars of newbie Tom Fisher and Scott Shields is the sort of music that will cause some people to run away screaming holding their ears. Certainly the sign of good metal music!

The rest of the tracks are just as brutal: ‘Scott’s Got A Time Machine (He Told Me Tomorrow)’ opens with crippling brash drumming and guitar beats good enough to be a mid track mosh pit filled breakdown. Vinnie Dickinson’s voice will seize your ears, grip on tight and batter them to pieces. In contrast ‘What Lies Inside’ opens with a softer feel showcasing the band’s more melodic sound before building into the rip roaring riff encased powerful track that follows. At least this small build up gives your ears a few seconds to recharge before carrying on.

‘Money Can’t Save You Now’ is perhaps the most evidence of the band’s influence from Bring Me The Horizon with Vinnie’s screaming at the beginning very reminiscent of Oli Sykes during their ‘Count Your Blessings’ stage: all raw, energetic and full of power. As the EP finishes it leaves you with baited breath wanting to go through it all again.

Let’s hope that the North don’t hold onto this band for too much longer so everyone else can enjoy a bit of this metal act. If their live shows are half as brutal as their music we surely can’t wait until a headline tour!