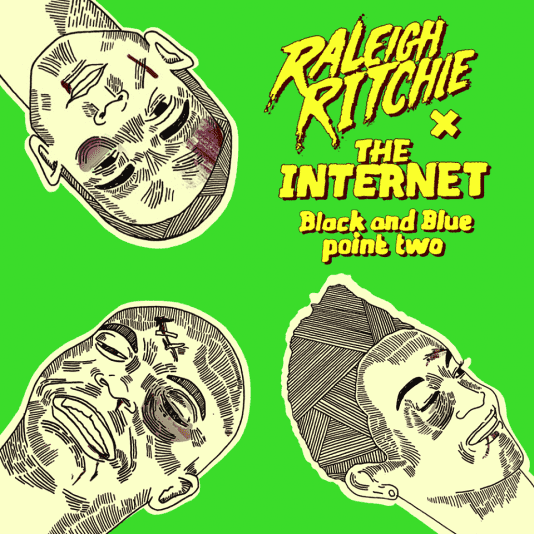 ‘Black And Blue Point Two‘ is the latest collaboration EP released by British vocalist Raleigh Ritchie and The Internet. Whilst Ritchie may have shot to fame with his recurring acting as Grey Worm in hit TV series Game of Thrones, his musical prowess comes to the fore once again in a five-track EP of remixes perfect for sitting back with. Sounds good for a chill-out afternoon, right?

With a recurring theme of electro-jazz soundscapes, the EP is designed to impress whilst still conveying the emotional impact of his previous EP Black And Blue. Stronger Than Ever still emphatically carries the emotion and distress a move from town to town can bring; Bristol-born Ritchie detailing his move from native grounds to London with defiant overtones, and lyrics such as ‘”I won’t be crushed by the weight of this town” encapsulating the turmoil such a move can bring.

Lyrically, Ritchie continues his tradition of strong, powerful words in all of his songs, mixing elegant language seamlessly with down-to-earth, real-life situations. A key sign of a lasting song is its ability to transcend barriers and speak straight to the deep, human instincts; and indeed, Ritchie achieves this perfectly with a powerful chorus in The Chased. The lines ‘You and me could stay or we could run away/We should build a city in another place’ details the high hopes and dreams we all have of love, whilst heartbreakingly followed by the reality of ‘taking money from your mother’s purse’ to achieve this. At its core, the song is a litany for breaking free from the chains modern life can bring, and a key track for dreamers to hold on to.

Stay Inside opens with the suitably pessimistic line ‘Drugs and girls, life and death/Is all that goes through my head’ which, with a different beat and backing track, could easily lead to a flashy, fast-paced rap. In the hands of Ritchie and The Internet, however, it sets the tone for a chilled reflection on modern life, with Ritchie once again going philosophical and exploring the dangers inherent in today’s society. A rallying cry against global corporations and advertising, Ritchie advocates a less TNC-controlled world; ‘when the underdogs rise again I’ll have my time’ indeed.

Gritty overtones emerge again in the final two tracks, with Ritchie going in-depth on the social exclusion severe addiction can bring, whether it be with drugs in Overdose or work in Free Fall. The latter’s pre-hook of ‘And I go down, down, down, down, down/ Wait for the crash and hit the ground’ states perfectly the knowledge that all addicts have; it won’t last.

‘Black And Blue Point Two’ may be at heart a new take on old songs, but The Internet’s simplistic approach to them lends a poignancy to tracks which originally felt slightly lacking. A key EP needed for afternoons of reflection. Raleigh Ritchie, once again, excels.

In this article:Raleigh Ritchie, The Internet