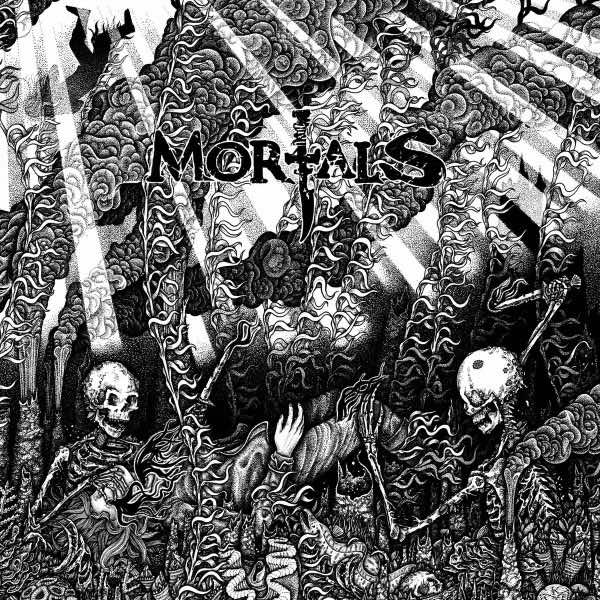 In the murky underworld, where worms wriggle through the dirt feasting on waste, where centipedes roam, lurking for prey and moles paralyze small animals with their saliva, it’s no wonder New York trio, Mortals, are clawing their way out of the earth intent on spreading their message of misery. As if the sun has no affect on them at all, debut album ‘Cursed To See The Future’ sounds exactly like it says on the album cover.

Like an inmate awaiting the lethal injection on death row, Mortals have nothing to cheer about. Opener ‘View From A Tower’ is a prime example of the most desolate music you are likely to come across in your lifetime. Mixing stoner sludge with black metal in a cauldron of bile this is music to go to war to, albeit a war that you know you will lose. With a ravenous groove and a rhythm kept in check by Caryn Havlik pounding the shit out of the drum skins, the only thing not really needed is the callous screams of the frontwoman.

‘Epochryphal Gloom’ is an understatement, this is music for those who are empty inside and want to open themselves up to the darkness. This is doom in every sense of the word, with fatal riffs and a bass that leaves you feeling dirty, this would be the soundtrack Hades would listen to as he welcomes the dead.

Case in point, the sprawling riff-monster that is ‘The Summoning’, with lyrics such as the “the future is bleak, the present’s no better,” the trio, it seems, are hell bent on making your ears bleed. However, their attempts at taking you on a journey through a battle of Middle-Earth, tests the endurance levels to the extreme.

‘Series Of Decay’ starts off in a flury of thunderous drums and a guitar, bass tag-team to choke the life out of you. Just when you begin to veer off into a daydream, this black metal titan switches to all-out thrash causing your ears to prick and heads to shake violently.

Playing like a herd of elephants on a leisurely stroll, closer ‘Anchored In Time’ is as heavy as they come. The shortest offering on the album by far and the most crushing, leaves you with the bitter taste that maybe less is more. Now, who has some Nurofen?

‘Cursed To See The Future’ is soul destroyingly good in places. The trio aren’t afraid to do things their own way and not many bands would be able to pull off a record that screams of an apocalypse on the horizon. Unfortunately, Mortals tendency to over-indulge in places will have many taking a tea-breaks as listening to this does feel like work.