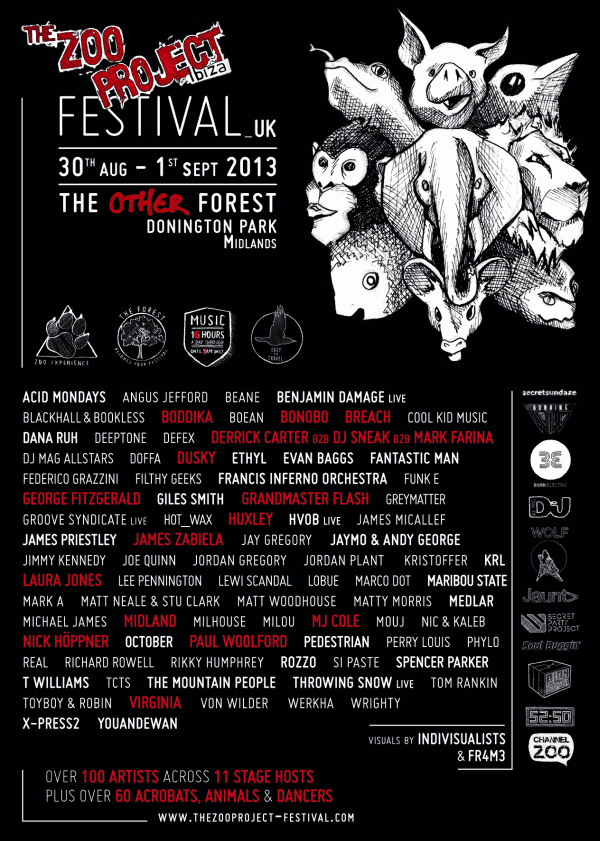 With 12 festivals in 2013 alone, a week in Croatia for Hideout Festival, a week spending every day partying in Ibiza and the entire winter spent weekend after weekend at nights in Bristol’s Motion and Manchester’s The Warehouse Project, I thought my body was prepared for anything. Rarely have I emerged from something a broken man, but after 3 days revelling in the madness that was Zoo Project Festival 2013, I feel I’ve finally met my match!

Originally the festival was meant to be in Kettering, but due to “unresolvable differences” with the venue, it was later moved to Donington Park, home of the famous Download Festival. This angered a lot of festival goers, particularly those close to Kettering, but the whole thing was handled very professionally by the Zoo Project team, who offered free tickets to every transactional buyer. If the free tickets weren’t good enough, full refunds were available.

Fast forward to Friday, after a lengthy drive from the depths of Devon and we enter the queue for the main entrance to the festival. It was short in length but lasted over 2 hours with strict searches for weapons, causing frustration we hope will be resolved next year.

Tents pitched, a few drinks down and we find ourselves in the arena about 5pm, immediately drawn towards the forest where “Maurice – This is Acid” was pumping out from an earth-shattering sound system. No programmes were needed here (although they were available) for we knew that every act booked across the weekend was going to provide an incredible atmosphere, booked for their skill and not their chart position. There was no Rudimental, Julio Bashmore or Disclosure here to attract the masses, just a line-up of pure talent that brought in a crowd passionate about house music.

Early on Saturday, after being woken up by loud cars on the motor circuit adjacent at the unfriendly hour of 8am, we saw Bonobo. His chilled out house tracks provided a cool, calm before the storm that prepared us for the night ahead. I was a little surprised to see him on so early, as I felt his set would be more suited to the end of the night, the perfect calm before people headed back to their tents, ready for round 3.

There were a few “non-house” acts over the weekend, a brilliant garage set from MJ Cole, but most notably Grandmaster Flash, who provided a welcome break from the deep bass that had shattered our bones for nearly 16 hours. At 55 years old, he still knew how to work the crowd. Dropping classics from the 80s to present, people were singing, dancing and jumping from record-to-record. I’m a big fan of my house music, but after so much of it, Grandmaster Flash was definitely a highlight of the weekend and a welcome difference in genre that went down a storm.

The highlight of the day definitely had to be James Zabiela. I’ve never seen the man play before, so seeing him for the first time left me absolutely speechless. His skilful approach saw the man jumping across the DJ booth across a range of devices that allowed him to drop effects and remix songs in real-time, a talent that is easy to do but hard to master. James Zabiela absolutely nailed it, his face showing pure passion and the crowd moving more than I saw over the entire weekend. 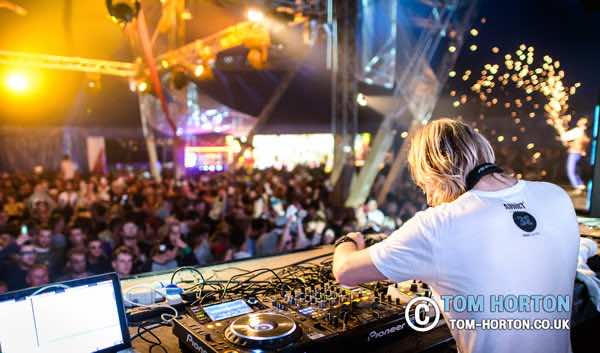 Sunday was definitely the best day for me. Maribou State delivered an incredible set that saw classic after classic soulful and disco track create a loved up vibe on the dance floor. I think most people would easily place Derrick Carter, DJ Sneak and Mark Farina at the peak of their weekend. After delivering an equally top performance at Tomorrowland, the Jackin’ House trio delivered a set that even on the final day of the festival, had people in all corners of the tent jumping.

Midnight arrived and the music stopped. Zoo Project had advertised the festival at 16 hours of music per day, so when things ceased, a lot of people were left disappointed. Sending thousands of people to bed when they were prepared for another 4 hours of music is never a good idea, but fortunately everyone was pretty well behaved across the entire weekend and I saw no fights. I asked the Zoo Project team about why things were cut so short on the Sunday (and started late on the Friday) and received the following response:

“We can only apologise for the fact that we advertised music at 16 hours per day when in fact that was only one of the days. We were so enthusiastic about the fact that we could go on until 4am on the Friday and Saturday, which is rare for festivals of this kind, that we got carried away.”

Monday morning and it was time to go. Due to a misunderstanding, the security team went around the campsite booting everyone out by 10am, despite the festival advertising the campsite as being open until 3pm. This was very dangerous for those having to drive, and while the management eventually realised this was happening and stopped the security team doing this, it was too late for some and many had already begun the drive home. The Zoo Project team have assured me this will not happen again.

The overall festival experience was incredible. Actors in animal costumes, props such as bath tubs, hammocks and many other nice surprises made for an unforgettable weekend. Being woken up early by loud race cars on a daily basis meant sleep was limited. Add in entire days jumping to house music and the weekend had soon left me physically and mentally destroyed. I crawled into bed that evening feeling the weakest I have done in years. I’d finally met my match, and I’d do it all again in a heartbeat. Zoo Project Festival, see you next year!