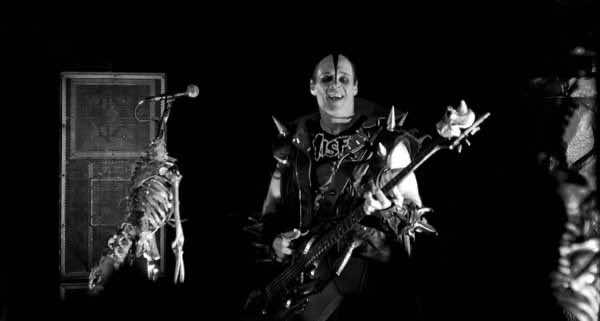 Anyone who goes to a Misfits gig and expects to have a pleasant time is kidding themselves. This was a night fueled by fist punching and head banging chaos. This was a night with Jerry Only behind the reigns, a night that will make your ears bleed but ultimately leave you screaming for more.

First up, Switzerland’s one and only ‘Those Furious Flames’ who brought to England a powerful set full of mind blowing Hard Rock. Their sound was electrifying and unique. Although they played to a small and cosy crowd, the reception was more than welcoming. HTF expect we will be seeing more from our Swiss friends in the UK, and hope that they do come back to rock our socks off once more!

With a combination of harsh, throaty vocals and powerful guitar solos TFF gave the ultimate recipe for a good old fashioned Rock N’ Roll band. Their fast punchy songs with raunchy riffs really suited the bill tonight and they got everyone’s heads banging.

Second on the bill is ‘Naughty Whisper’ joining the European posse after traveling all the way from Milan to accompany ‘The Misfits’ on this tour. Their ‘Obscure Rock/Gothic Metal’ persona had a real distinctive sound which made them stand out above the rest of the support acts tonight. Their loud and exciting stage presence got people moving and out of their chairs and thumping their fists in the air.

The scratchy vocals of front man Andy Star really stood out above their fast and vigorous guitar solos. The drum beats were fast and robust which really got heads banging. As the venue started to fill up more and more people came to the front to watch these guys instead of hanging around at the back by the bar; which is always a clear sign of a good crowd shifting band.

Third act of the night are the legendary Juicehead from Chicago who managed to get a mosh pit going from the start to the very end of their set. The three-piece punk band delivered a lively and upbeat performance of dirty,  jaw splitting tunes of every way, shape and form.

With the comical facial expressions of vocalist Rob Vannice these guys were more than fun to watch.  From front to the back of the room they got the crowd well and truly hyped with their sing-along chorus’s and aggressive riffs. By the end of their set the audience were just about ready to wee their pants in excitement for The Misfits.

After a long and climatic intro with inches of smoke from the fog machine The Misfits were up and what an entrance they made! With skulls attached to every mike stand and a drum kit that looks like it had just risen from the grave. It was evident that the fans of Reading were in for a long night of horror fueled fun.

With each song blasting into the next one Jerry Only left no time for applause and no time to stop the pits. It’s true what they say, there’s no rest for the wicked. With the generic dirty, grimey fast paced beats that make The Misfits so inspiring it is no wonder they are the iconic band they are.

Jerry’s graphite bass guitar sounded as heavy as it probably was to hold and his trademark spiky leather jacket just added this surreal zombie, metal hedgehog look to the whole stage set. The strobe lighting got the crowd going crazy and their fists were high in the air as fans screamed along to the harsh sound of Jerry’s voice.By the end of the night it took an hour to get my hearing back but it was so worth it.

With more line-up changes over the years than you can shake a fork at,  the members that now make up The Misfits are incredible. Jerry has still got it, and his voice is still as unique and mind blowing as it always was. Make sure you check them out on the rest of their UK tour while you still can!