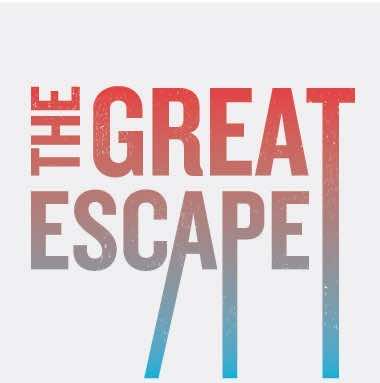 The Great Escape is a weird beast in that it’s as much (if not more) an industry showcase as much as it is a festival, and this is good and bad in both respects. Bands try harder to get PR and Magazines on their side, equalling some great performances, it can also mean a lack of general punters in the audience, leading to some less than enthusiastic audience reception (some bands really deserve more than the British clap of hands). What is apparent however is that Great Escape is the best place to see the bands that will be invading the indie airwaves across the next year or so. Here’s the expansive lineup of artists Hit The Floor managed to see across the weekend. Some were amazing and some were dreadful. But that’s the fun of Great Escape, going around like an explorer making new discoveries and brand new favourite bands.

I should be frank, I honestly thought they were a college band until I saw them dotted across the festival (and highly recommended at that). That’s to say they just sounded average, a band trying to fuse prog-rock elements with the Stone Roses sound. With competent guitar they just about made it listenable but they would never make the next acid infused indie hit with a rhythm section that had no mood. (Martin-john McDonnell)

Shimmering indie pop bouncing off the Haunt’s low ceiling. Described to me in the queue as “Mersey Beat”, but to me sounding more like Syd Barret doing his own version of ‘Magical Mystery Tour’. Which is to say it was the perfect algorithm of tuneful indie and psyched out weirdness. The band’s latest single ‘Girls’ is perhaps one of the catchiest old school indie tunes I’ve heard in a while. Well worth checking out. (Martin-john McDonnell)

What is there to say about Skip & Die? Samba infused dance music with indie infusions would be my best shot. With energetic frontwoman Cata.Pirata revving up the packed crowd the audience were having it as we struggled to see the stage. The beats were strong while the tunes were big, it’s a concept that’s made all the best indie dance, and here is no different. (Martin-john McDonnell)

Centred on an unusual contraption christened the UFO, Finish electronic duo Phantom deliver a hedonistic minimalist sound fronted by Hanna Toivonen’s eerie tones and guided by producer Koskinen’s take on the Theremin. In part a musical experience, and in part an elongated advert for the self-constructed instrument, both present themselves equally well. The former engulfs the sparse room with equally sparse composition, while the individuality of the drawn-out notes provide evidence of Koskinen’s artistic ability alongside that of the UFO. It may not be ground-breaking, yet there is something simple and beautiful in Toivonen’s vocal that adds an extra level to a more conventional sound. (Ben Tipple)

Shortly after commenting on the similarities between The Great Escape and Austin, Texas’ renowned showcase event South By Southwest, it is immediately evident that Tom Krell of How To Dress Well is used to more grandiose environments. His shy and introverted demeanour is mirrored through the music, and magnified by the usual community centre setting. The intensity of the likes of ‘Cold Nites’ and the stripped back honesty of ‘Set It Right’ sound equally as heart wrenching as they echo around the venue. If grandiose is his style, the intimacy of the location serves to further open Krell up to the audience. At times, even with the artistic projection backdrop, the Brighthelm Centre could be your living room, with just one in the audience, standing in well-deserved awe. (Ben Tipple)

The best cure for a hangover is a greasy sausage sandwich, the second best is DFA/White Stripes inspired rock. Well we were fortunate to have both due to the wonderful Kid Karate. Composed of one guitarist and the standard drummer the band were louder than 90% of the bands on the bill with riffs that crunched and squealed in equal measure. Probably more suiting to a late night slot, the group did well to get a positive reaction from the polite but hungover crowd. (Martin-john McDonnell)

Accoustic troubadour Gavin James arrives on stage after Kid Karate to play his mellow acoustic tunes. While doing respectively, There’s just not enough tunes there and his set in my opinion falls a bit flat. It just seemed to be a lot of by numbers acoustic balladry and there’s only so much of that a person can take in one sitting before getting a bit bored. (Martin-john McDonnell)

I’m ashamed to say in retrospect that we might have fallen for the hype surrounding the band at the festival. It turned out that really the hype wasn’t that deserved. While having a bankable safe sound that will surely appeal to the younger pop fan, for them to play a festival that’s meant to be about new sounds and ideas, they just fell a tad flat. I proclaimed to myself I wouldn’t fall for the hype again after a pretty average set. (Martin-john McDonnell)

I broke that promise to myself not to fall for hype very quickly as I bounded over to The Komedia to see Deap Vally, thankfully my instincts were proven right. Sleaze driven rock in the vein of The White Stripes, if they’d crawled out of a whore house on the Las Vegas strip. That’s to say it was sexed up, glamorous and dirty all in one gorgeous package. The reaction was pretty wild as a set of teenage boys (not me I must note) fought over a sweaty rag that guitarist and sex on legs personified Lindsay Troy had just mopped her sweat onto in a display that was more reminiscent of an old school flasher outside a public school than a cute display of affection. The point stands though, this was the one band of the weekend that brought out a full on reaction from what was across the festival an overly polite audience who were more likely to clap you to death than attempt a stage invasion. If Deap Vally don’t explode in the next year I may just have to re-evaluate the current indie scene. (Martin-john McDonnell)

Sounding like pub rock gone through the psych lens isn’t the best tag line I could strap onto a group, but hold with me on this one. Playing a selection of Television/Modern Lovers style songs but putting them through the heart of classic 60’s rockers 13th Floor Elevators by adding swirling organ sounds and mild guitar freak-outs, the band had to work hard to bring a visibly broken crowd to life, but they just about managed it, getting people up on their feet and moving. The Television elements were so strong that I almost expected the band to break into ‘See No Evil’. Which is to say they sounded fucking awesome. Well worth checking out! (Martin-john McDonnell)

After trying in vain to get into a packed out Haunt to see Temples, I wound up in the Komedia to see a band who were in the rap-rock category. Fearing the worst I almost didn’t enter the venue, what if it was a secret set from Limp Bizkit? Fortunately the band were more in line with the Rage Against The Machine sound, although admittedly with tamer lyrics, so who could complain there! (Martin-john McDonnell)

The festival hub is such a great scene, free to all the public it houses dogwalkers and old men alongside the festival crowd, it acts as the cooking pot of the festival and probably had the best vibe, being outside in the square. The Dancers are the perfect example of the hub at its best. A band you’ve never heard of, probably never going to hear again, but sounding brilliant all the same. With an old school brand of indie that shares its roots with The Pixies and Fleetwood Mac it was all god fun and the lovely dancers are certainly worth an explore. (Martin-john McDonnell)

Anybody suffering from early Saturday afternoon hangovers at this stage is about to have the cobwebs well and truly blown off. Opting to move the set up off the stage in favour of a cataclysmic floorshow, Damarels deliver fast paced alternative punk at an exquisitely high volume. Throwing caution to the wind, this is as punk-rock as The Great Escape is going to get, disregarding the welfare of the audience, their hearing and most prominently, the inanimate mic-stand which bears the brunt of frontman Alister Gall’s force. Brutal, ferocious and inventive, Damarels are one exciting prospect for the future of disregard… consider this a warning. (Ben Tipple)

Sitting awkwardly between post-rock and post-folk (if that is a genre), The Black Heart Rebellion do not appear to have made up their mind regarding a musical direction. The band sound suitably ominous when opting for the expansive soundscapes that incite the post-rock comparisons, yet the melodramatic folk references and elongated traditionalist compositions are over the top and ultimately clumsy. As the frontman tells of Belgian folklore, it becomes difficult to shake the ridiculous nature of the overt theatrics. For a band that garnered acclaim for their step into the unknown on this year’s ‘Har Nevo’, the fragmented nature of the sound fails to adequately transfer into a live setting. (Ben Tipple)

The Great Escape may not seem like the typical festival for a band like Wounds. Straight off tour following their supporting slot for Billy Talent in arenas around mainland Europe, the atmosphere in The Hope is comparably subdued. Not to let it dampen their savagery, frontman Aidan Coogan makes use of the limited stage space, all the while counteracting the untraditionally polite festival crowd. His antics see the monitor tumbling off stage and the microphone travelling around the unsuspecting audience. Although their style would usually suit an onslaught of crowd surfers, stage divers and mosh pits, the likes of ‘Dead Dead Fucking Dead’ still pound around the venue with substantial force. The Great Escape may not always suit this style of band, yet Wounds look like they could lay anything to waste. (Ben Tipple)