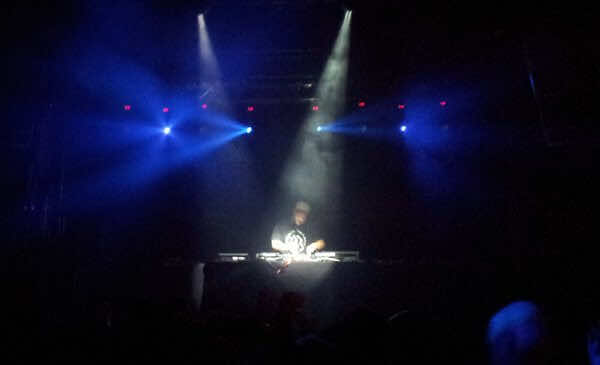 I don’t think this could ever have been a bad review. DJ Shadow is one of the most influential and prominent figures in not just the hip-hop scene, but a whole multitude of genres, with a particular importance placed on the electronic scene in recent years. His tune selection and turntablism skills are just incredible, so when he was announced for Bristol In:Motion, along with Coldcut (Jon More and Matt Black), Benji B and Reso, I rushed to buy a ticket before they sold out.

Fast forward to the 11th and we enter a very quiet Motion. We didn’t exactly arrive early, so when we arrived just in time for Coldcut‘s set, we could not believe how dead the place was. It was eerily quiet! The average age was around 40 and the venue was probably at around quarter of it’s usual capacity (not including the extra warehouse they open for larger events).

This didn’t stop us having a good time. Coldcut‘s eclectic set was just perfect. The mixing, beatmatching, scratching and sampling were all executed with military precision, using a Novation Launchpad to make each song their own. Some incredible tracks were played, including classics such as “Sugarhill Gang – Apache” but the peak of the performance came when they finished their set on “Switch – A Bit Patchy“, an absolute banger of a tune that was massive back in the boom of Electro House a few years ago.

Following on from Coldcut was DJ Food & DK. I must admit, I was a little disappointed. The tune selection was infallible, yet the energy and beat-matching let them down. Almost every song mixed in was just a little bit off!

Finally, DJ Shadow was on. Just two CDJ‘s, a mixer and an electronic drumpad were all he needed to execute a perfect set. No laptops or fancy gadgets, just pure skill made for an unforgettable set. This wasn’t just a standard set, but a journey through music, celebrating 25 years of Solid Steel. It was honestly one of the best sets I’d ever seen. If I had to critique, I’d say there was a little too much “Trap” music. I feel this genre is starting to pass it’s time, which leads me on to the next DJ taking control of the main stage, Benji B.

I really, REALLY like Benji B. I feel his sets are usually brilliant, but the songs he started with did not appeal to a crowd whose average age was around 40. Playing Trap songs such as “Flosstradamus – Rollup (Baauer Remix)“ would have appealed to the younger generation, but certainly not the crowd in Motion on this night. I feel it was this reason that the main room quickly emptied. There was about 8 or 9 people left in there during his set, while the tunnel was crammed with people, shoulder-to-shoulder, raving to the wonderful sounds of Reso.

I’d never seen or even heard of Reso up until tonight, but I’m glad we saw his set. It was brilliant, with heavy Drum and Bass sending shockwaves of energy through the crowd. Second to DJ Shadow and Coldcut, this was definitely the highlight of the night. It was also great to escape the dull sound of Trap music, for something with slightly more energy!

All in all I had an incredible time. The lights in Motion let things down somewhat (although there was more of a show than at the UKF night), as well as the non-existent crowd, but the music and sheer skill behind the turntables made up for it tenfold. I can’t wait to set foot in Motion again.