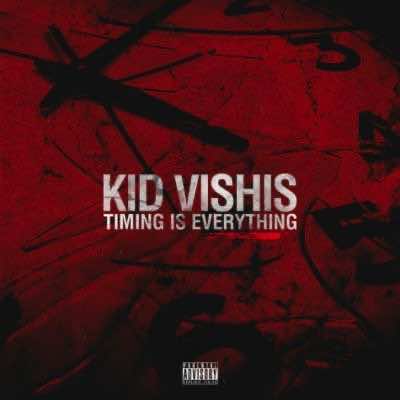 Fresh flows’ crashing off prominent beats is the feel for Kid Vishis’ debut full- length, Timing Is Everything. The record could easily impress us being played back to front. ‘Message To The MC’s’ and ‘Look At All My $**t’ tell us that Vishis is taking no prisoners with ‘Big Brothers’ and ‘Talk Behind My Back’ boasting quirky flows which are intriguing and tell you all you need to know about this new and inventive wave of hip- hop.

While everything is fresh and colourful, Kid Vishis has a sound that we’d like to see him make his own. While it’s inventive, it doesn’t sound entirely personal just yet, but when he masters it, as we have no doubt he will, everyone better be ready.

Being the younger sibling of respected rapper Royce Da 59, has no doubt given Kid Vishis the very edge he needed to get started in the rap game, and we are treated with a guest appearance from the man himself on album closer, ‘Coward’. However, as Timing Is Everything demonstrates, Vishis is paving his own path, and we’re certain it’s going to take him places.

Timing Is Everything is exciting to say the least, and you should be just as intrigued as us by what the rapper is offering on his debut. Don’t let this kid pass you on by. Stop, and listen carefully.