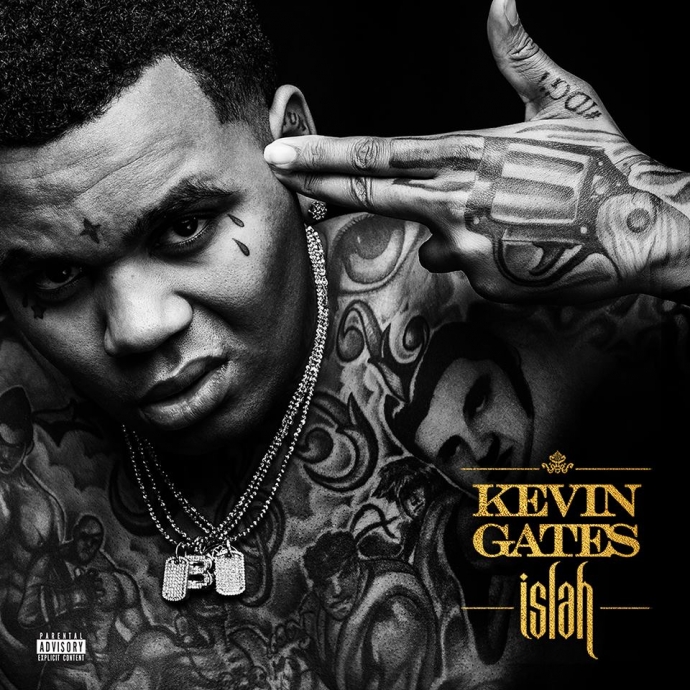 Although Kevin Gates seems to have been in the news and blog headlines quite often, it doesn’t ever seem to be about his music. It’s been nearly three years since he was signed to Atlantic Records and in that time, a number of events have occurred that have added to his infamy. The New Orleans-born rapper is arguably better known for assaulting fans at his shows in Michigan and Florida, continuing to sleep with a woman after finding out it was his cousin and his extended variety of social media antics, including one in particular that proved offensive to many.

But since 2013, Gates has released five mixtapes that have met critical acclaim. Now, on his debut with the major label Atlantic Records, Gates is showing again that he is not about to become shy and retiring anytime soon. He said in a recent interview that he named his first album after his first daughter; “To inform, to improve, to make better, and I believe that’s what my first daughter did to me”. Islah is as intense as it is versatile and may potentially surprise and create new fans out of those people who recognise and refer to him only as “that crazy rapper”.

Throughout Islah, Kevin Gates shows the versatility that most first-time major label artists are striving for. He mixes rapping and singing all with a sense of vulnerability yet playfulness. He uses a plethora of tools to combine and weave his emotions together into his tracks. Islah offers club tracks with ‘Kno One‘ and chilled out tunes like ‘One Thing, all alongside the standout tracks of ‘2 Phones‘, ‘Thought I Heard (Breadwinner’s Anthem)‘ and ‘Pride‘, where his lyrics and rap game are strong throughout.

Another great thing is that you don’t have to go and google Gates’ lyrics as there is no garbled rapping or singing – this is a plus point. His focus isn’t on spitting out rhymes as fast as possible, but it’s translating his ideas and emotions across. We like that.

Unfortunately, there is bad news too. When listening to Gates’ dozen mixtapes since 2006, there is a clear divide of his old and new stuff. We know that artists go through transitions and a lot of the time, we love them for it, but Islah sounds almost too glitzy and polished to even be from the same rapper. This production works on tracks like ‘Really Really‘ but the others it falls a little bit flat. Islah also does away with the mass collaborators that we so used to see on albums, particularly in the hip-hop and rap genres, which is great. But there is one track, “Jam” that features Trey Songz, Ty Dolla $ign and Jamie Foxx, is undoubtedly the weakest track on the whole album. The track’s sound feels lost on this album, which is a shame considering the amount of proven talent that feature on it.

Would it be possible to trim the fat on a lot of the tracks on Islah? Yeah, sure. Could it be a little more true to his older stuff? Probably. But this is Kevin Gates’ debut album, he’s going to play by his own rules, and if this album is anything to go by it’s only going to get better from here on out.