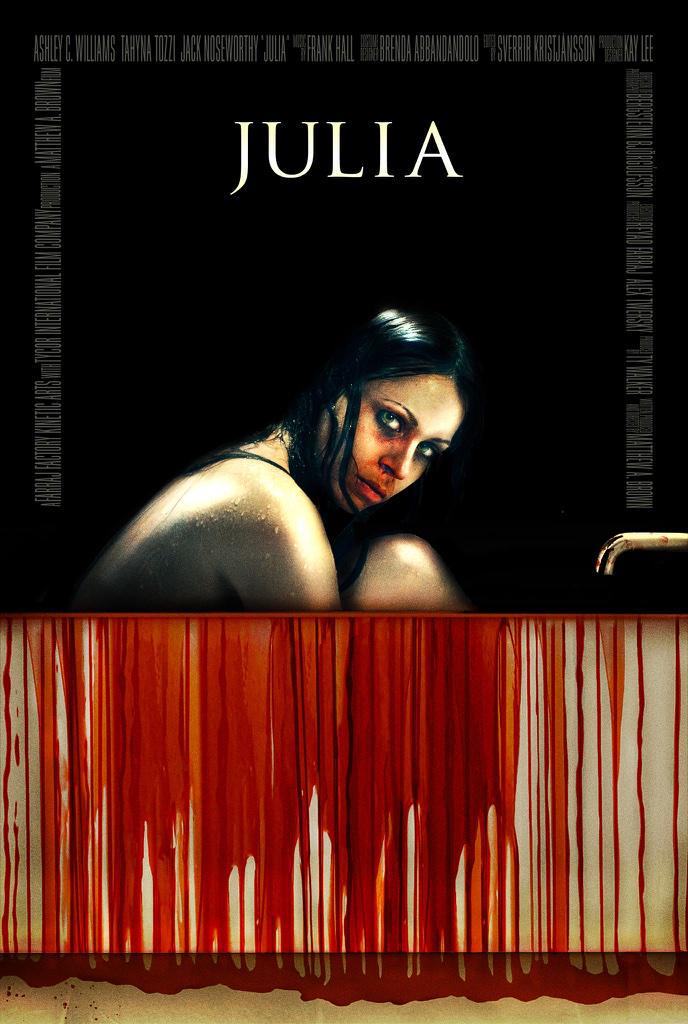 Neo-noir revenge thriller Julia is due for DVD release this Monday (14th September), so get ready for blood, gore, and lesbian shower-kissing scenes. What more could you ask of a thriller?

A lot, as I discovered. Julia is better than a lot of revenge-horror out there, those I Spit on Your Grave wannabee remakes that never quite cut it. But, Julia has a long way to go before it would be deemed as a classic, or even a “Top 50” in the psychological thriller/ horror genre. Although the concept is interesting in places, it’s not used to its full potential  and the lack of explanation, exploration of character and a story-line that – to be fair – isn’t the best, have let it down massively.

So, here comes the spoiler-y bit, sorry guys! Julia is centered around a young woman called – you guessed it – Julia, who finds herself desperate to wreak revenge on three men who performed a planned gang-rape on her after being lured to their den. In deep emotional trauma, she seeks the help of a “therapist”, who has unconventional ways of dealing with the event. She joins a cult of abused women, all under instruction from their male therapist to seduce men in nightclubs, have sex with them, and then chop their penises off. Lovely.

Nothing better than a bit of graphic castration to brighten up any old thriller.

The one rule of therapy? Don’t go after your attacker, only nameless, male victims. If you do, your therapist will turn you into a living vegetable. Don’t ask why the writer (Matthew A. Brown, also director) thought that made sense. Because it doesn’t.

Predictably, Julia ignores her therapist and uses her new-found confidence (displayed when she takes her glasses off and puts make-up on, how edgy) to track down her attackers and teach them a lesson by cutting their penises off and stabbing their eyes out. Great.

I don’t know if you can tell by the tone I’m setting, but the story-line is just a bit shit. And by a bit, I mean totally.

You would hope the acting would have redeemed it, but I’m afraid not. Julia’s character (played by Human Centipede actress Ashley C. Williams) seemed absolutely flat throughout, and I found myself wondering at the 30 minute point if she was actually going to speak or just stare into the camera for the next hour with sad, wide eyes. Blank stares and silences must make up more than 50% of the actual dialogue and the other characters, although better formed than Julia, are still stiff cardboard versions of real characters. At times it even seemed hard to pity Julia, the rape victim, due to her pure lack of any personality at all.

At some undeclared point in the film she transforms into a bold, sexy and strong murderess. But none of this is shown through her character or expression, purely through sexier make-up and the fact she doesn’t wear her glasses anymore.

Because every time I want to be confident, I just throw my glasses out of the nearest window and go “HELLO WORLD!” It just doesn’t happen like that.

And this is the point where I realise what the problem is. The age-old argument of “style over substance” has been proven. Brown has relied far too heavily on the visual aspects and the stylistic qualities of a neo-noir thriller, that he has completely forgotten about what carries a film – plot, character, and the strong development of both. Without these, all we are seeing are images in a sequence.

I must compliment the cinematographic elements of the film, which really pulled it up in my estimation. They were on key, suitable and effective, and were let down by the substance.  The lighting was constantly dark, almost black-and white in the shading, which worked to an extent and looked very effective in drawing out the features of the character’s faces. The darkened lighting was great, but slightly over-used and at some points a lighter scene could have useful in giving the audience a break. Camera angles were sometimes unexpected, interesting and jarring (in a good way) which supplied a great visual element throughout.

One of my favourite elements of Julia has to be the soundtrack, which was actually brilliant. It suited the film perfectly, highlighting the heavy dark moments and then drawing back as we reach the more relaxed scenes. I have no idea on artists or track names, all I know is that everything fitted perfectly in the sense of music.

I have to give this film a 7, because despite the fact it’s not the best and wouldn’t be anywhere near my list of “great films”, I would definitely watch it again, if only just to sit in bemused confusion for 95 more minutes. It’s intriguing, has some good moments in it, and the effort made on the cinematography was great. Unfortunately it seems that the writer and director sacrificed a strong and meaningful story for a gritty and visual piece of art, which could have been an award-winner if both elements had been valued equally.

Advertisement. Scroll to continue reading.
In this article:Julia