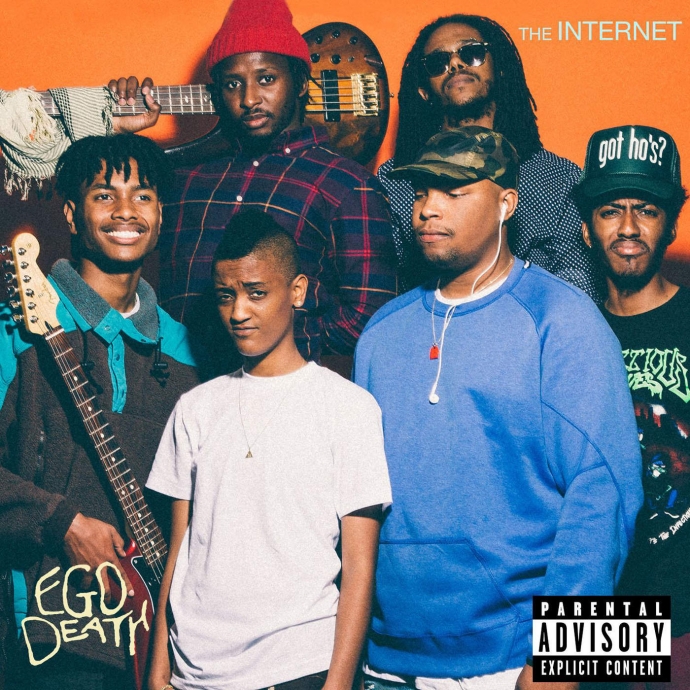 When you are two of the original members of the now notorious and ultra-popular hip-hop collective Odd Future, trying to pursue a solo career without letting the legacy of previous fame and fortunes overshadow your current projects, can steer one of two ways. You can either make a shallow attempt to try to escape the giant shadow of your illustrious past, or you can wander off in to the sunset and create something truly wonderful that outshines everything else you have done to date. This is exactly what Sydney Bennett (a.k.a. Syd The Kid) and Matthew Martin (a.k.a. Matt Martians) have done since forming The Internet – an incredible hip-hop / soul / RnB based project – and this time around they return with their sophomore effort Ego Death.

First of all let’s define the term ‘ego death’ – complete loss of subjective self-identity. But also in psychedelic experiences (particularly LSD and Ayahuasca), the ego death is representative of stripping you spiritually, to the point where you transcend your current self to something far greater and far more knowledgeable. This is incredibly fitting as with their new album Ego Death, that is exactly what The Internet have done. They have transcended to another plain of artistic creativity and development – individually and collectively.

First of all, lets start off with the musicianship on show. Sydney Bennett further expresses just how much of an incredible singer she really is, whether she realises it or not. Her voice is nothing short of beautiful – a perfectly soothing mix of soulful vocals which comes across like a cross between FKA Twigs and Aaliyah. Her individual progress as not only a DJ, but as a producer, songwriter, and a musician is ever-growing. Although whilst her lyrical content throughout the album can be a little repetitive, you cannot fault her for the devotion that she commits to her vocals.

But let’s not forget the rest of this incredible band – bass guitarist Patrick Paige, keyboardist Jameel Bruner, drummer Christopher Smith, and backing vocalist / keyboardist Tay Walker. All of whom are exceptional musicians, who create a real sense of warmth and ambiance with the live instrumentation. With this inclusion, it makes The Internet sound so much more dynamic, and some may say the can draw comparisons to The Roots, Jurassic 5, and D’Angelo and The Vanguard.

There are also some really impressive guest spots on this album as well. Particularly on album highlights such as ‘Go With It’ featuring Vic Mensa, ‘Gabby’ featuring Janelle Monáe, and ‘Girl’ featuring Kaytranada. Although saying that, the one song on here that has the weakest guest spots (and sadly the weakest track on Ego Death) is the album closer ‘Palace/Curse’. This tune just does not seem to fit with the rest of the album’s overall flow. Not to take anything away from guest vocalists Tyler, The Creator or Steve Lacy, but it just seemed like a highly underwhelming way to end a great album, but also slightly contradicting the transcendency of what The Internet have become since parting ways with Odd Future.

With this being said, it seems that the repetitive lyrical content and underwhelming ending to Ego Death seems like the only flaws present. But moving on to more positive mentions, the production on this album is tight! Matt Martians has done an incredible job. Although there are a couple of compression and level inconsistencies, and some overly saturated effects processes – particularly in ‘Palace/Curse’, and ‘Just Sayin’ / I Tried’ – some of the albums highlights hands down go to the smoothness of songs such as ‘Special Affair’, ‘Go With It’, and ‘Under Control’.

Overall, Ego Death is an album which has so much potential and promise. It is truly a wonderful listen and does warrant a modest playability factor – particularly being the soundtrack to a dreamy warm summer’s evening. But whilst it has the potential to peak at the top of the mountain, it sadly falls only slightly short of the mark due to a couple of minor inconsistencies. If we put these flaws aside, The Internet have only just transcended to greater heights than they already have. And if this is an indication of further things to come, then the sunset on the horizon is only going to look far bigger and far greater to what they have already seen and experienced.

In this article:Odd Future, The Internet