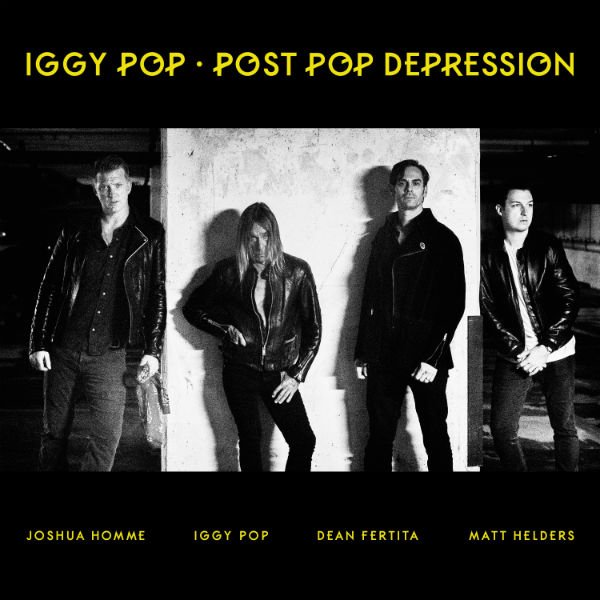 Iggy Pop is undoubtedly an icon, he raised to fame in the late 1960s as the lead singer of The Stooges who were inducted into the Rock and Roll hall of fame in 2010 and were arguably a band who defined the 1960s/70s as an era and raised the profile of proto-punk and garage rock, the legendary American rock star is the epitome of the sex, drugs and rock & roll lifestyle.  Often when an artist so connected to a period of time releases a new album it can be a bit of a flop as they’re still stuck in that time and haven’t moved on which makes the music seem old fashioned or out of place. However, Iggy Pop completely goes against this in Post Pop Depression; the album sounds current yet it also hasn’t completely left ’70s era Iggy in the past, it’s a perfect balance.

The album was produced by Joshua Homme of Queens of the Stone Age, Homme wrote some of the songs and plays the guitar, bass, piano and also sings on the record. Is it the modern influence of Joshua Homme that stops Iggy Pop making the same mistake as other musicians by not moving with the times? Dean Fertita who is also part of Queens of the Stone Age and Matt Helders, the founding member and drummer of Artic Monkeys, also join Iggy and Joshua on the record. The influences of Queens of the Stone Age and Artic Monkeys are unmistakably heard in the album, the hard rock, guitar-heavy sound of Queens of the Stone Age can be recognised in some tracks, as well as the indie-rock post-punk-inspired sound of the Arctic Monkeys. It could be assumed that all of these influences on the album would make it easy to lose Iggy Pop’s iconic sound and style, but this doesn’t happen, Iggy’s classic garage-rock sound shines through strongly and the appearances of Homme, Fertita, and Helders help emphasise the legendary musicianship of Iggy Pop.

The first track of the album, Break Into Your Heart, has “post pop depression” written all over it, the song is moody and dark but has that pop song element of being extremely catchy. Iggy Pop then embodies David Bowie in Gardenia, the track shares the same unique sound Pop and Bowie created together during the ’70s whilst living in Berlin. Bowie’s influence is strong in the album, after all, he did produce Iggy Pop’s most acclaimed albums, The Idiot and Lust For Life. The entire album screams “post pop depression” the aptly named title is a running theme throughout. Iggy eerily sings the lyrics “Death is the pill that’s hard to swallow. Is anybody in there? And can I bring a friend? I’m not the man with everything. I’ve nothing, but my name” before melancholically chanting “I have nothing but my name” over-and-over in American Valhalla. Is he trying to tell his audience that his “pop days” are over and he has nothing to offer anymore other than his infamous stage name, Iggy Pop, which isn’t even his real name. Could this be Iggy Pop’s Blackstar?

The album finishes with Paraguay, a track that has a very ‘Queens of the Stone Age’ sound. The song carries a deep feeling of sadness, Iggy sings, “I’m tired of it and I dream about getting away.” Could he be expressing his tiredness towards fame, does he want to finally get away from his Iggy Pop persona? Lastly, he sings the lyrics, “I‘m gonna go heal myself now,” the final lyrics on the final track of the album seem to hold strong significance, it could have positive connotations as it may be suggesting a fresh start for Iggy Pop, however the song still seems to convey a lingering feeling of sadness that you just can’t quite put your finger on.

Post Pop-Depression could easily become one of Iggy Pop’s most successful albums since the late ’70s; with the recent loss of great music icons such as Lemmy and David Bowie, Post Pop Depression feels extremely poignant and relevant at this point in time. From the gloomy and honest lyrics to the album title, it’s clear that the sixty-nine year old is expressing a different side of himself as more mature, emotional and even fragile rather than the previous chest-slashing show off famed for his crazy onstage antics. But one can’t help wonder, will this be Iggy Pop’s last album?