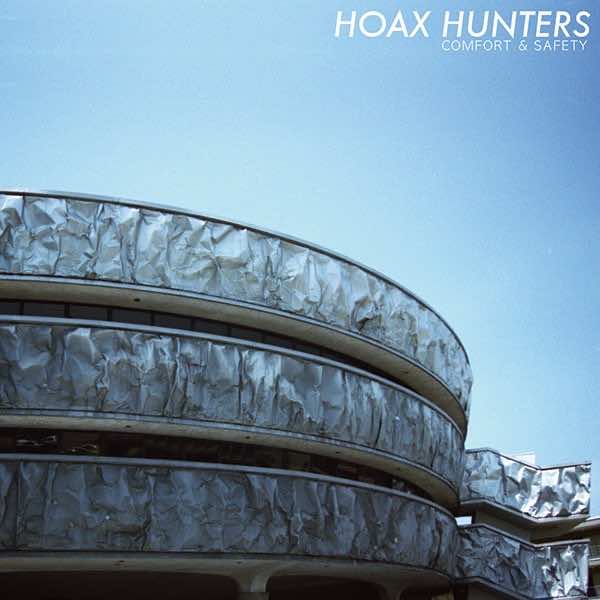 Virginia punk band, Hoax Hunters, have just put out their brand new album, ‘Comfort & Safety‘, and my my, it’s a good ‘un.

Drawing influence from 1970’s punk with semi muted vocals and crushing guitar lines, Hoax Hunters are able to create a sound that lends itself well to sweaty basement venues and maximum chaos. This is especially evident on opening tracks ‘Hoax Hunters‘ and ‘Volume‘, which ooze rebellious energy whilst still retaining accessibility. You don’t have to be a punk fan to enjoy Hoax Hunters. ‘Copy Of A Copy‘ contains another fundamental ingredient of any good punk record. It has this air of scuzzy swagger; an unquestionable confidence that really shines through.

‘In The Background‘ gives off a slightly more grungier feel with low, monotone vocals and a deep bassline at its core, and stands head and shoulders above the rest of the album. ‘Breathe‘ takes the EP back to punkier ground with its brash chorus and a guitar solo so sharp it could cut through glass. This track screams teenage rebellion.

Every album has a track that stands out as being a little more accessible than the rest. In the case of ‘Comfort & Safety’ the track in question would have to be ‘Perception Of Choice‘. Now, being accessible is by no means a bad thing. If you’ve never heard of Hoax Hunters, go straight to this track and you’re guaranteed to be hooked from the get go. Unlike other tracks on the album, this particular song will suck you in on your first listen with its toe tapping beat and a chorus you can easily lose your mind to.

‘Glitterbomb’ keeps up the anarchic feel, bringing in a much punchier vocal performance as well as a grislier bassline. This is carried on into ‘Riskless Business‘ that contains, by a mile, the album’s catchiest riff and lyrics heaped with attitude. By the time, ‘Six/Five‘ comes around one great little nuance becomes obvious. Whether it was intentional or not, it’s hard to ignore how much more noticeable the lead vocals have become over the course of the album; going from near inaudible at the beginning of the album to being at the forefront of the tracks nearer the end of the album. Remember that ‘scuzzy swagger’ we mentioned earlier? Well this is another track with more of that, and makes ‘Six/Five’ a close contender for the strongest track on the release.

‘Erase‘ is the album’s most high octane track. This song is simple, lyrically, but very effective and would undoubtedly appeal to those enjoy their music loud, however this is also a grunge lover’s dream with its brooding, almost psychedelic middle section and ending, fading the album out into white noise.

With so many nods to the punk era, it’s unclear if Hoax Hunters are trying to emulate or imitate – who cares? One thing is for sure: it’s refreshing to see a newer band put out a straight up punk record nowadays that hasn’t been watered down, leaving the ‘punk’ part there only in sentiment. Punk is very much alive. Who’d have thought?

Hi, I'm Laura. I'm your typical sarcastic Scot. When I'm not drinking excessive amounts of coffee, you'll either find me planning my next big adventure, obsessing over cats or at a gig.