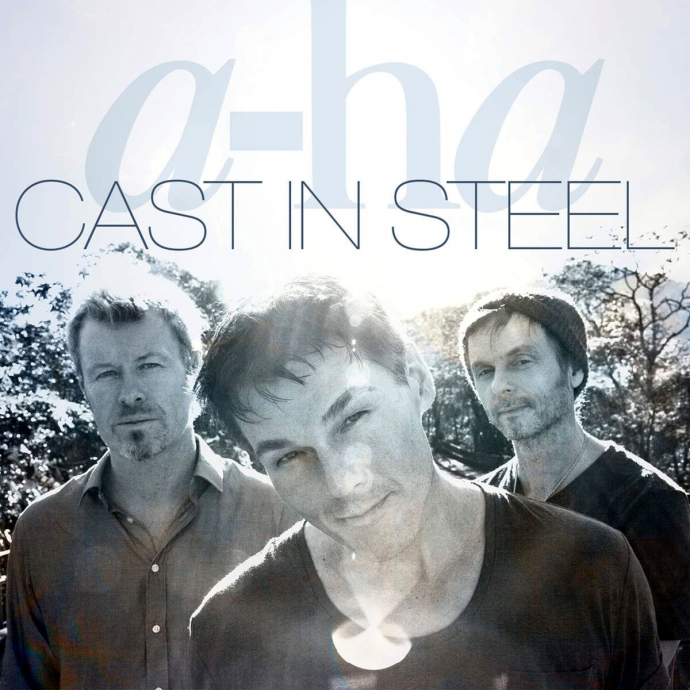 Norwegian trio A-ha are back to celebrate the 25th anniversary of their record breaking 198,000 people strong concert in Rio. Yes, that many people paid to see A-ha once. Many have undervalued their 30 year career, but they have won awards all around the world, shed millions of albums and have bands as big as Coldplay pledging their influence. With their 10th album, Cast In Steel, the band have returned to producer Alan Tarney (producer of their heyday 80’s albums including 1985 debut Hunting High And Low), certainly hoping for some of the old magic.

A-ha have stressed that they returned due to the songs of guitarist Paul Waaktaar-Savoy being so brilliant they had to record them. Though the reunion will only be for two years, is the new material up there with the trio’s finest work ? Well, no but certainly there are enough moments on Cast In Steel for the early resurrection of the band. This is actually their strongest record since their first comeback 2000 with Minor Earth Major Sky.

The new album has taken on a mixture of the best sides of A-ha – the orchestral ballads in the vein of their 1988 hit ‘Stay On These Roads‘, ‘Under The Makeup‘ and ‘Living At The End Of The World’, the electro-pop of  ‘Forest Fires’ and the darker, mature sound of their 00’s era has returned on ‘Giving Up The Ghost‘. Sadly the more interesting 90’s period seems to have been forgotten. Cast In Steel is crying out for more guitar, but one reason for the diverse sounds on the album could be down to the fact that the band no longer write together. Is A-ha now really a vehicle for three solo artists sharing one voice? And what a voice it is. Morten Harket’s sounds as strong as ever, he can still hit those high-notes. They at least sound at home with this material . The previous pop release of Foot Of The Mountain all seemed a bit forced. This is pop music for grown-ups and grown ups who haven’t secretly wished for a song called ‘Door Ajar’. They even close an album with an ode to the demise of the good old-fashioned phone directory with ‘Goodbye Thompson’ (if only that was true).

All in all an unexpected return for an under-valued band. Not their best album in their 30 year history but certainly worthy of a listen and proof that not all 80’s pop bands need gimmicks and collaborations to create their art. And with all they have gone through – they certainly are cast in steel (though I’m certainly not going to be the first or last critic to use that phrase).

In this article:A-ha, Cast In Steel, pop