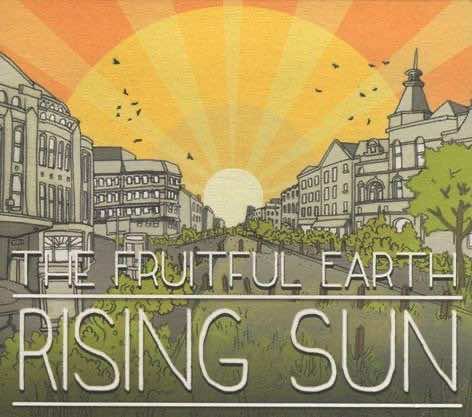 The Fruitful Earth have had a few line-up changes over their past two albums, but with their latest full-length release, Rising Sun, the band seems to have settled into place. Combining classical composition with contemporary twists and rock influences makes for a unique sound that only The Fruitful Earth bring to the table.

The album, as a whole, is delightfully relaxing. With the light piano melodies and the sweet yet sultry tones of vocalist Sarah Blair’s voice, Rising Sun manages to create a mellow mood without being downbeat. For example, the opening track ‘Firebird‘ has a seductive, rough edge with vocals that are reminiscent of the husky but charming tone of ‘90s popstar Alanis Morrisette, coupled with an easy-going tune that allows the listener to instantly unwind. The relaxed mood continues through tracks such as ‘Sun‘, ‘Up All Night‘ and ‘Natural High‘, which has a cool country twist to it.

However, the mellow sound of Rising Sun manages to pick up the pace in some tracks. For example, ‘Shake‘ has a crazy, frantic melody during which even the rhythm seems to lose itself, accompanied by the gritty distortion of vocals that give the track a sexy, ‘80s rock chick sound.  This spunkier sound can also be heard in the album’s penultimate track, ‘Ford Cortina‘, which gives this cute song an interesting edge. ‘Honey Bee‘ loses edge but still retains that same catchy rhythm with a poppy tempo and a fun sound that has the listener wanting to snap out of their laid-back frame of mind and get moving.

The stand-out track of the album is most definitely ‘Sweet Music‘. The song is undeniably uplifting, with an inspiring, optimistic outlook on life that could get almost anyone feeling positive. The song opens with the lines: “Three minutes of wonder and mind blowing sound / It’ll lift you up when you’re feeling down.” The whole three minutes and fifty-three seconds of the song continues bring a warm, sunny, smiling feeling to even the most down-and-out listener. Rising Sun is easy-going, but it definitely has its upbeat moments, and jumps from one musical sound to another. Bouncing between moods, genres and decades, Rising Sun has at least a little something for everyone.