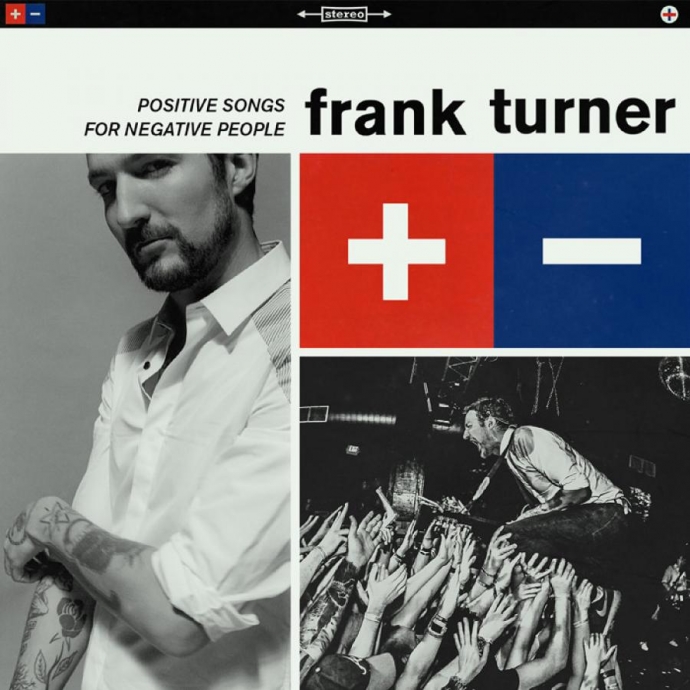 Frank Turner has been the voice and saviour for anyone who believes that music is for the people. A voice to inspire a generation and knock down the system . Inspired by the 80’s folk/protest singers like Billy Bragg. Turner has released acclaimed albums and slowly become one of the biggest underground heroes (i.e. not on Radio One playlists and barely any TV coverage) the UK has to offer. He can fill arenas without ever being a household name and even open an Olympic ceremony. But with his sixth album Positive Songs For Negative People, this may all change. This could be Turner’s time to explode.

It’s been ten years since he fronted the hardcore outfit Million Dead and slowly punk tattoos have faded and his folk/rock style has been on an upwards momentum. The conversational busker style of just a man with a guitar and a point of view who needed to be heard, was what Turner was all about when he first went out alone. Now the bearded troubadour has a full sound and a broad smile.

Although he begins the album with a back to basic folk ditty about his London home on ‘Angel Islington‘ he then takes a turn of direction and we are welcomed to the bombast sound of Turner circa 2015. The drums and guitars shine in the same epic soundscapes that Daniel Lanois helped created for Joshua Tree era U2 and has now been copied from Snow Patrol through to Mumford n Sons. Quite the departure for Turner but sometimes the only way to make people hear yourself clearly is by making a friendly splash.

The lyrics are exactly what anyone would imagine from the album title.  These are a collection of self help, “you can do it” inspiration tracks to that may be slightly cringe seducing to the more cynical fan, still hoping for the previous vitriol that turned on many fans to Turner’s music. There are still the personal conversational songs like ‘Opening Act Of Spring‘ that the singer is fondly known for, but now the music has been sprinkled with violins and mandolins where before all that was needed was a strummed beaten up guitar and a kick drum.

The band which seems to be mostly instrumental on the overall sound of Positive Songs For Negative People is The Waterboys. A shared love of the ‘big music’ has blossomed into the production of the album. Stadium rock production with an Irish gypsy heartbeat is the best way to describe much of the albums brightest moments like ‘Get Better‘ and current single ‘The Next Storm‘. His most commercial work yet and most certainly his best chance for taking the leap into the mainstream.

The constant optimism may be somewhat hard to swallow over the entire course of the album, apart from the live recorded finale ‘Song For Josh‘ a heartbreaking tribute to Josh Burdette, a club owner who committed suicide in 2013. Turner’s shouty vocal style does also sometimes ruin the most rousing of choruses. The old punk style has not yet been buried, but a more restrained choice may have helped out and stopped some tracks being less Springsteen more Sham 69. Quibbles aside this is his most accessible album to date and a great welcome to new fans of a wonderful British talent.