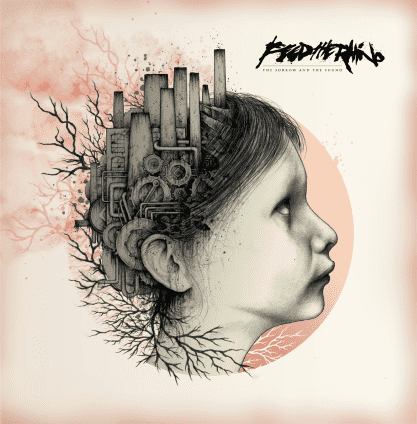 Feed The Rhino have a lot to live up to: their debut album ‘Mr Red Eye’ established them as one of the best British underground rock bands, and ‘The Burning Sons’ saw them kick their quality up into the stratosphere. So ‘The Sorrow and The Sound’ needed to be special. Well we come bearing good news.

Within three minutes of the Kent quintet’s newest release, they have you by the scruff of the neck. Album opener ‘New Wave‘ is a monstrous ride with a huge chorus and a kick ass riff that will drive this record into your mind like a barbed spear. ‘Give Up‘ follows much the same pattern, with a huge riff and hook that will surely be a centre-piece for future live shows.

It’s not all sheer muscle and venom here though; ‘Black Horse‘ starts as a gentle affair that still manages to sound epic, before opening into a soaring and stunning piece of music that builds toward an ending that just blows you away. Overall, the track really wouldn’t sound out of place on a Deftones record, which in itself is an indicator as to just how accomplished this band has already become.

Quite often, you will find an album from a young band that asserts itself well and ends on a high note too, but sags somewhat in the middle, but is absolutely no sign of that here. ‘Revelation Not Revolution‘, ‘Set Sail For Treason‘ and ‘Deny and Offend‘ are a punishing middle triptych that ensure no lapse in quality or heart, giving ‘The Sorrow and The Sound’ a spine made of concrete and steel.

But it’s really the titular track that stands head and shoulders above the rest of this album. A phenomenal 4:53 that will surely go down as one of the single greatest tracks of 2014, let alone Feed The Rhino’s back catalogue. A sweeping masterpiece of modern rock music that showcases the depth, intensity, range, talent and confidence of this young band. The closing third is a sheer barrage of fury that culminates in a screaming guitar solo of breath-taking proportions and hears vocalist Lee Tobin at his visceral and raw best.

Feed The Rhino are their own beast, one that will force you to accept them as what they are and we have no qualms with that. ‘The Sorrow and The Sound’ is quintessential listening; this is the new textbook – this is how modern rock should be done.

In this article:Century Media, Feed the Rhino, The Sorrow and The Sound