To think that a decade ago, Every Time I Die rarely got to tour over here in the UK. For whatever reasons these may have been, it left a wild, rabid British fan base eager to follow them to as many UK shows as humanly possible, and cementing a live show legacy which has echoed with notoriety, infamy, and legendary status for many years now. The past couple of years have seen Every Time I Die play some of the most visceral and chaotic shows of their career, and on the strength of their latest amazing album Low Teens, they are essentially at the peak of their career. But having played a sold out – and allegedly the biggest headline show of their career at the Koko in London a few days previous, how would they fare up in the vast reaches of Birmingham at the O2 Institute?

But first on this evening is the most talked about UK hardcore band of 2017 – Higher Power. Already establishing themselves as one of the most hard working bands in the country right now, it is fantastic to see them honing their craft more and more every live show they play. Already quickly establishing themselves as a force to be reckoned with within the hardcore scene – particularly on the strength of their debut album Soul Structure, they are on fine form tonight by all accounts. Though the only problem they have in a show like this, is that Higher Power excels at shows without barriers, and in a much smaller capacity. But for this occasion, it is great to see them rightly exposed to a wider demographic of music fans.

However much to our surprise, the biggest stinker of the evening was Knocked Loose. Now to clarify before we proceed, Knocked Loose are totally sweet at their style of hardcore, and their album Laugh Tracks is by far one of the fiercest produced albums of 2017. But a few nights previous at the Koko, we was trying to figure out whether or not they actually had any substance in the live environment… the sad truth is, is that they fall short of substantial authenticity, due to some small elements in their set which make them come across as rather cheesy and cliche. These elements being the now amusing gutteral grows from the main guitarist during nearly every song. It is fine if the raw voice is part of the expected vocals in the style of the music and song, but when talking to the crowd… it just makes you come across like an alpha male Cookie Monster. It’s cheesy as f**k and doesn’t do the band many favours in being taken seriously by new spectators. On the other side, to new ears, it may seem like they are playing the same song throughout the entire set, which can draw on rather repetitive. With all this in mind, this is not to say Knocked Loose are a bad band, because they are actually rather good. But they just need to focus on those small elements which they can essentially get rid of. With all the hype surrounding them right now, they sadly come across as overrated on this occasion.

Up next is the legendary Canadian hardcore crew Comeback Kid. Hot off the trail from their fantastic new album Outsiders, these guys just seem to get better and better every time they come back with a new album, or return to our shores. New songs such as ‘Surrender Control’ and ‘Somewhere Somehow’ are just as fierce as their previous efforts, but sadly and frustratingly, they do not get the crowd they so deserve tonight. One would have thought that there would have been more of an emotional connection to fast-paced music which you can lose your shit too, but for whatever reason there seems to be some sort of apathy to this style of music. Maybe it is only the die-hard Comeback Kid fans here tonight who are showing their love who are appreciating their set, maybe there are more curious heads who want to appreciate it. Or maybe the clearly populated room  don’t know how to respond to anything over the tempo of 80bpm…. One thing for certain is that whilst Comeback Kid are still one of the best bands in hardcore right now, they deserved so much more during their set.

Now, of course, the main reason why most people are here is because of our neighborhood friendly hellraisers from Buffalo, New York… Every Time I Die. Their set is one of some of the best cut choices from their back catalogue (especially for yours truly). When old favourites like ‘Romeo A Go-Go’, ‘Ebolarama’, and ‘Floater’ are unleashed, there seems to be a more visceral and passionate appreciation with the fans. But saying that would be a gross understatement, because those who are here appreciate Every Time I Die’s entire back catalogue – no matter what they decide to play. Whilst the set leaned heavily on their latest album Low Teens we are even treated to some fine cuts like ‘INRIhab’, set staple ‘We’rewolf‘, and the downright brutal ‘No Son Of Mine’. But when latest tunes like ‘I Didn’t Want To Join Your Stupid Cult Anyway’, ‘Map Change’, and ‘The Coin Has A Say’ are unleashed, the crowd hits momentary fever pitch.

However once again, one of the main problems with this evening is that the Birmingham crowd seems a little lethargic, maybe apathetic? This is not a testament to the entire crowd mind you, but it seems there is a little hesitance. Which is incredibly strange for a fan base for a band whose live reputation often exceeds them. However, there are also a lot of Southern travelling crews who have made every single Every Time I Die show on this tour, who no doubt bring the noise and help kickstart the pit into a whirlwind of fury. But whilst Every Time I Die still prove that they are one of the most love, unique, and celebrated bands in hardcore/rock and roll today, they didn’t quite get the crowd they deserved tonight. Without trying to make many comparisons to their unbelievable show at the Koko a few nights previous, the crowd participation for this show was a little underwhelming. Regardless of the situation, Every Time I Die are still the kings of their style… and they are not going anywhere anytime soon!

Ahead of their return to Slam Dunk this year, we had a chat with Comeback Kid’s Andrew Neufeld to see what he’s most excited...

Were you lucky enough to catch Malevolence play a sold out show at Plug last week? If not you missed out BIG TIME. 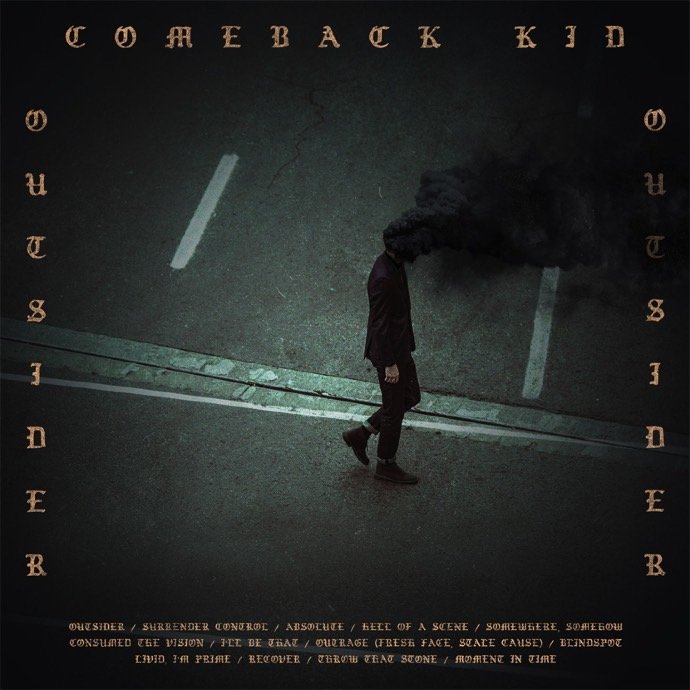 Comeback Kid have just released their sixth album 'Outsider' via Nuclear Blast Records. Find out what we thought of it here!