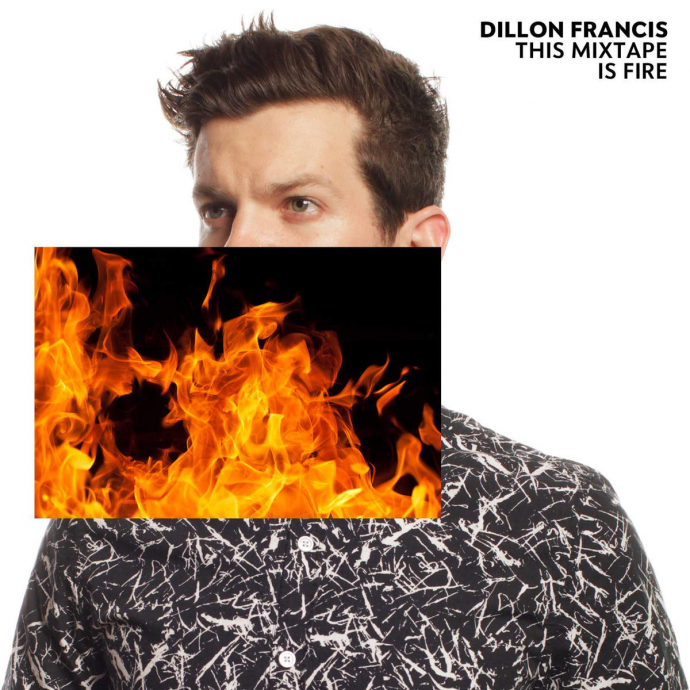 Dillon Francis: DJ, Producer, God like figure and occasional German impersonator. Fast becoming a household name with his ever bettering productions and furious DJ sets, Mr. Francis is a force to be reckoned with. His latest release, the oh so subtly named This Mixtape Is Fire, provides us with seven tracks of nothing but the most kick-ass Moombahton grooves.

Kicking off with ‘Bruk Bruk (I Need Your Loving)‘, it’s clear that he means business. Hefty as f**k, funky as f**k and firey as f**k (as the EP’s name doth imply), it’s a strong start to proceedings, building instantly high expectations. What follows is a collaboration with worldwide superstar Calvin Harris in the form of ‘What’s Your Name‘ – three and a half minutes of snarling synths, infectious rhythms and deliciously over the top production. EDM based influences from Mr. Harris are strongly present on the track. There’s a far softer sounding build toward the latter moments of the track than would be expected but it works. It’s also a pleasant change to hear the aforementioned collaboration partner stepping away from his usual poppy dance sounds to create something a little more unique. More of this please?

‘Bun Up The Dance‘ again delivers on the fire promised by the release’s title (subtlety really isn’t found around here is it?), with a Ghetto-Blaster worthy groove and some Skrillex esque bass lines. What it lacks in any form of modesty it more than makes up for in ballsy, skull-crushing brutality.  This, along with some typically Dillon humour (plenty of silly noises and such), makes for yet another killer track.

A couple of tracks later sees the onslaught of craziness take a back seat for something a little more soulful. ‘Coming Over‘ features a stunning vocal performance from James Hersey and double team production from none other than Kygo. It would be easy to mistake this number for a Deadmau5 creation, with some strong similarities to tracks such as ‘The Veldt‘ and ‘I Remember‘, albeit with a far more down-tempo flavour.

As the show comes to a close, we are greeted with ‘I Can’t Take It (Party Favor Remix)‘. Now here comes the big gun guest appearances from none other than German Deep-House legend DJ Hanzel and moustachioed Vine star Redneck Dill. It’s very unlikely that there will ever be another co-creation from this trio, making the price of the album alone 100% worth it. It’s more of the same smouldering Moombahton, but we love it.

It’s fair to say that this EP lives up to it’s name and that Mr. Francis has lived up to his well-gained reputation. Let’s hope that another mixtape won’t be too far from release. We need more.

In this article:dillon francis, this mixtape is fire