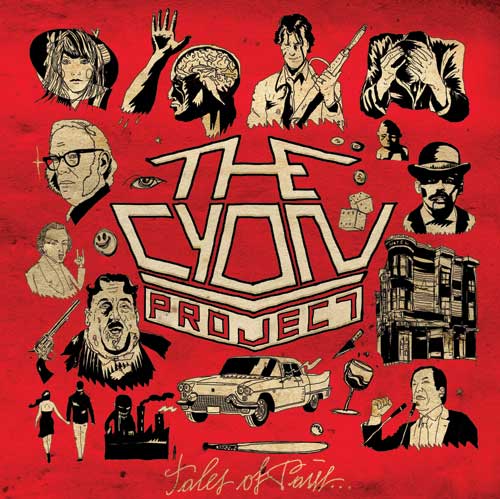 Italian rockers The Cyon Project are back again with an eclectic mix-up of rock, thrash, and, erm, acoustic? (Stay with us. It works, we promise.) Their new album, Tales of Pain, is a hard one to decipher and understand. All albums have personalities, a real defining tone to them; this album brings to mind an eccentric scientist, dabbling about with this and that, scoring up as many errors as he does successes. Bear this simile in mind when listening to this album; the eccentric scientist may mess up, but experimentation leads to perfection sometimes.

The album kicks off with ‘Joe’, a symphonic instrumental song. Which is immediately followed by the hard rock track ‘Cheesy Song’, and then the more grunge rock ‘Mr Creosote’. And then a pop-punk-meets-metal ‘Riot’. Don’t get us wrong, we’re all for experimentation, and the songs themselves are incredibly good. The Cyon Project, formed in 2009, have a real knack for writing catchy, addictive songs. A heavier version of Blink-182, as it were. We’re just struggling to understand the overall personality of the album. We’ve got a beautiful power ballad in in ‘Phantom Limb’, but this is almost immediately contrasted with ‘Raise Your Head’, a song that appears to have more breakdowns than Queen’s Bohemian Rhapsody.

Finishing off the album is ‘Englewood Hotel’. And honestly, this sums up the entire album; bonkers, catchy, and totally over the place. It collects all of the themes in the album, and attempts to present them in a mish-mash of screaming, singing, symphonics, guitars, everything. We’ve got rock, we’ve got hard rock, power ballads, metal, pop-punk; the list goes on. And, like this album, it works in places. We’re excited to hear more of The Cyon Project, and we’d highly recommend Tales of Pain to everybody. However, it’s definitely not a album you can just pick up and stick on.

In this article:hit the floor, rock/metal, Tales of Pain, The Cyon Project