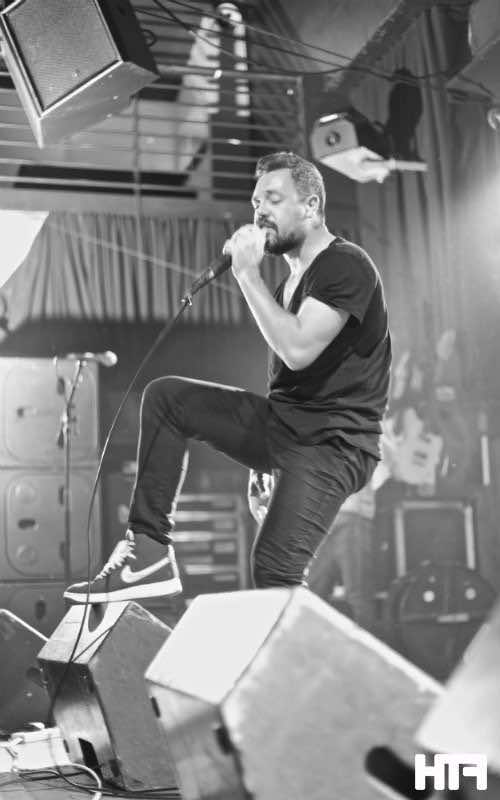 As a tangled mop of blonde hair pushes his way past the tightly pack crowed, dragging a good few meters worth of microphone cable behind him, it’s easy to forget that Welsh six-piece The Blackout have been a band for just over 11 years. Respectfully, they’ve had their fair share of challenges throughout their career – plummeting album releases and label drops to name a few – but despite everything they still have as much passion and perseverance as they did when they first started.

With front men Gavin Butler and Sean Smith using their larger-than-life personalities to draw the crowd in, on-stage banter is almost a trademark when it come to The Blackout’s sets. “Don’t look at him. He’s the nineteenth sexiest man in Wales. Look at the rest of us ugly mugs,” Smith yells motioning towards his co-vocalist.

From the soar of their latest single ‘Wolves’ to classics like ‘Higher Than Higher’ and ‘We Are The Children’, there’s no denying that one of the reasons that band have stayed together for so long is their fan base. As smitten as a kid in a candy shop, they’d almost do anything for the six piece, as they spin around dancing the opposite wall at Smith’s command. One girl even goes as far to whipping her shirt off and dancing on her friends shoulders.

Sure, they may have the same stage gimmicks they did when they first started. Asking fans to get down on the floor? Check. Stampeding off stage and into the crowd? Check. Encouraging just as many mosh pits as they do circle pits? Double check. But it’s the fact they’ve stuck by them for so long, which really shows their dedication to live shows. And judging by tonight’s performance, don’t expect anything different anytime soon.

In this article:the blackout