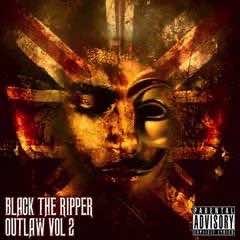 Black The Ripper is an artist that is hugely respected in the UK Hip Hop and Grime scenes due to his emotionally fueled conscious rhymes and the number of consistent independent projects he has put out since 2005. The North London rapper has recently just dropped his new mixtape Outlaw Vol 2 of his own label Black Magic Militia which sees him once again take on the political and religious establishments and share his love for his area and of course lady Mary Jane.

Outlaw Vol 2 is seventeen tracks strong and although there’s a couple of songs on there that could be skipped, in its entirety the mixtape delivers 100% untainted, independent, conscious Hip Hop. It’s on tracks 2 and 3 ‘Fire Is Coming’ and ‘Esoteric’ that Black The Ripper clearly demonstrates his ability to passionately drop the wisdom on his listeners, resonating with the fifth but often forgotten element of Hip Hop- knowledge. Both bangers are produced by UK legend Harry Love and it’s on ‘Fire Is Coming’ that the self-titled ‘Blackiavelli’ rapper most energetically reveals his political opinions and exposes the power structure he opposes. It’s usually poor journalism to compare artists, but Black The Ripper defiantly has a sort of English Tupac vibe going on, that mixture of street and book smarts characterised as the educated thug.

“I was raised wrong my mind state was shitty, everything they taught me in school was lies teachers tried diss me, tell me bout Henry VIII but not my history, I’m a product of slavery they can hate me but it’s their fault, they made me if it weren’t for them I’d be in the sun eating mango speaking native tongue but instead were in London selling drugs where police harass us, but really there the thugs.”

“Edmonton all day is where is I f*cking rest at, where I smoke my zest at, where I shot my s at, had my first set at raves with Rowdy Squad and X Camp” is what he states on ‘Get Back’, which alongside ‘Outlaw’ sees a more upbeat, grittier display of production and lyricism. Throughout his music Black The Ripper is always keen to rep his ends, Edmonton, North London, being both proud of where his from but also acknowledging the hardships felt there. His also always keen to acknowledge his independence in making music and getting to where his got on his own merits, it appears these two influences go hand in hand as Black The Ripper is a genuine hard working rapper of the people.

There are some big names on this mixtape demonstrating how well respected Black The Ripper is in the scene, featuring the likes of UK heavyweights: Lowkey, Akala, Benny Banks, Dot Rotten and Jaja Soze plus more, not to mention a transatlantic feature from Queens rapper Cormega. Black The Ripper kills it going verse to verse with Benny Banks on ‘I’m Just Being Me’, Dot Rotten’s pain ridden vocals on ‘My Life’  are also worth a mention and ‘Chasing Papers’ with Jaja Soze deals with the struggles of living under the pressures of the monetary system. Yet it is ‘Revolution Ting’ featuring Lowkey and Akala that sticks out the most, partly due to the verse from Lowkey who has been on a musical hiatus since 2013, partly the sick Dexplicit beat, but it’s mainly down to Akala’s quality verse at the end which makes this one of the best tracks on the mixtape.

Hands down this is one of the best releases from a UK artist this year. Black The Ripper wastes no time in reminding us why his considered one of the illest in the scene, being able to spit knowledge on a cross section of topics. The production is also sick but with Dexplicit, DJ Skits and Harry Love involved that was always going to be the case. Outlaw Vol 2 is a continuation of that good old independent, underground, conscious UK Hip Hop that is carrying the torch for real Hip Hop culture that is currently vacant in the mainstream. We here at HTF highly recommend this mixtape to anyone which you can buy online here.

In this article:Black The Ripper