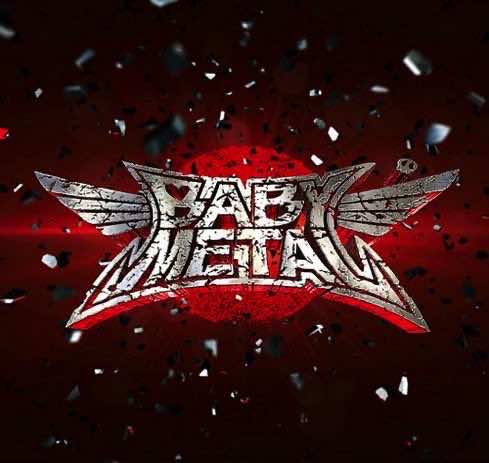 Every now and again, there comes a band (or an album) that just kind of defies all realms of explanation. Sometimes in a good way, sometimes in a bad way, and other times it just plain and simple confuses the fuck out of you due to a number of possible reasons. The debut album by Babymetal has just managed to tick all three of these notable boxes, and in some ways this reviewer is still scratching his head in absolute bewilderment.

First of all let us get to know a little bit about Babymetal’s history. The band started as a side project by the J-Pop group Sakura Gakuin, who were entrants on Idol, which is the Japanese equivalent of Pop Idol. Ironically, none of the members of Babymetal had not a bloody clue what metal music actually is. Which brings me to the further point… they could have arguably been too young to even understand what metal music is when they first started this project (bearing in mind that when Babymetal was first created back in 2010, lead singer Su-Metal was 12, and other members Moa-Metal and Yui-Metal were 10!).

What has actually culminated is one of the most intriguing, utterly mind blowing, and confusing debut albums that has not just come out in the 21st century, but quite possibly of all time.

At the time of writing this particular review, it is Sunday 9th March 2014. This reviewer has already listened to the album throughout and for the first time in his entire life, literally has no idea what to say or think after the first initial hearing of Babymetal‘s self-titled debut album. There is so much going on within this album, and with so many conflicting thoughts and bewilderment that are currently gravitating the circumference of this writers unusually large cranium, that it is quite frankly impossible to even write down what he has to say about it. Forget the musical complexities of bands like The Dillinger Escape Plan and Ephel Duath, forget the weirdness of artists like Captain Beefheart and Frank Zappa, and you can even dismiss the bravado and outrageousness of fellow Japanese band Maximum The Hormone. We get what they are trying to achieve – but for this debut album it is just too much to take in on the first day of listening, this is another level like some kind of weird Twilight Zone parallel of strangeness and wonder that is beyond human explanation. Sort of like finding the answers to quantum science and mechanics, that kind of magnitude.

For the time being, it looks like there is going to be some quiet contemplative time for said reviewer to digest just exactly what he has listened to. To be continued…

After much lengthy contemplative thought in order to process everything that has been heard, it is of a much formal (and arguably controversial) opinion, that the debut album by Babymetal is just absolute genius. Yes, GENIUS.
The air of conflict that every listener will probably go through with this album will be the same as all of us at Hit The Floor felt. Ask yourselves, ‘do I love this?’, or ‘do I hate this?’.
The main thing here that will more likely be the final sway in the positive stance, is that this is a genuinely fucking awesome album.

Firstly, no fault can be found within the musicianship. It is an absolute monster hybrid of sounds and influences.
You can hear hints of Carcass, Enter Shikari, Lamb Of God, The 5,6,7,8’s, and even the glory of Japan’s own The Mad Capsule Markets (especially on the track ‘Catch Me If You Can’. Hell there are even slight suggestions of 90’s European happy hardcore / techno in there as well (see track ‘Ii ne!’), pure and unashamed J-Pop (‘Do-Ki-Do-Ki-MORNING’), the rhythmic melody of the England football club chant (‘4 no Uta’), Bay Area thrash (‘Headbanger!!‘), and even battle / fantasy metal (‘Benetsuki – Akatsuki’).

Secondly, whoever their manager is a 101% marketing genius. Bear in mind, that Babymetal were born out of an experimental category on a Japanese version of Pop Idol.
This is the one main reason why technically, if you are a die hard metal fan and are stubborn enough to shun all pop music and anything that does not have a Slayer riff, you by all means should hate this with every inch of your fibre. But… there is a truly genuine likability factor about this album. Usually we can all safely say that we hear most albums we come across, give them one listen, and then just forget about them. Babymetal‘s debut album however has an extremely addictive flavour about it. Almost like Pringles… ‘once you pop, you can’t stop!’.

The management team know exactly what they are doing. Hiring in a bunch of obviously astute and technically trained and gifted metal musicians, and have basically created a monster that not only appeals to metal fans who like something different, but it actually transcends that level and also appeals to the masses of J-Pop, and even general pop fans as well! Even as far as going to say that it also appeals to electronic music fans too (although there is some sheer rip-off moments which would genuinely make The Mad Capsule Markets grimace like someone who just lost £500 on a football bet).

Thirdly – the production is magnificent. It sounds like a genuine treat to listen to. Consistent, crisp production and mixing. The levels are 95% right, but there are some moments where the guitars are a little quiet (not like the entirety of that Christopher Lee battle metal album howler Charlamagne), but regardless this can be forgiven due to the overwhelming catchiness of the songs, and mint studio work gone in to this project.

It just has to be put out there – Babymetal‘s debut album WILL turn a lot of heads, confuse the entire fuckery out of every metalhead, electronic, and pop fan alive if they ever heard this. But you know… with songs like ‘Gimme Choko!!’ and ‘Megitsune’ being so bloody catchy and hyperactively fun, how can you seriously not like this??

Open your mind to the possibility that you could well learn to love this album. It is a slice of marketing genius on every level, and look at the success it has already brought them. Babymetal‘s self-titled album is the most freak / unique, shot in the dark, original metal album in recent memory. It is utterly bonkers on every level, but in all fairness it is a stupid amount of fun. Is this just a fad, or is this the start of something real fresh? Only time will tell…

Outspoken champion at life. Kicking against the pricks since '85.