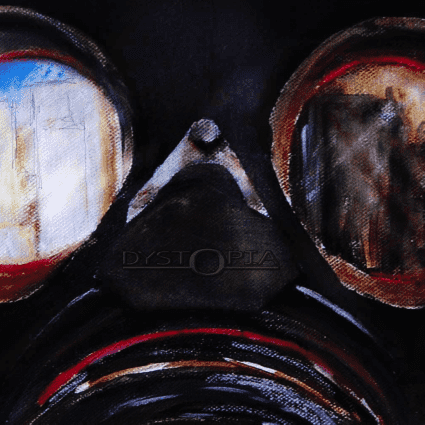 If you’re on the look out for a new band to listen to who meets the standard, the norm, the breadth, then you’ve come to the wrong place. Burnley hailed quintet Another Dead Hero just about mash every big grunge and metal rock band together, leaving behind their unique sound and no disguise in sight. If this wasn’t enough to cast their shadows away from the ordinary, then their re-release will. Yes, you heard right, a re-release. Dystopia, formally released last year, has been given the green light for a second go next month, and HTF are here to give you the lowdown of it.

Dystopia opens with a 57 second instrumental frenzy simply titled ‘Intro’. It begins with sounds as if you were walking through a cemetery on an eery misty night, but soon kicks into electronica elements that sends you into a world that feels extremely Limp Bizkit-like. This fuels for the fire for follower ‘Change The Game’. Its a recipe comprised of Linkin Park’s Mike Shinoda with a dollop of Limp Bizkit’s Fred Durst, and its very satisfying. It even has elements of the internationally adored psychedelic sounds of Deftones. As an opening duo, it certainly does no less than hook you in.

These vocals filter through the rest of the record, especially in tracks ‘I Don’t Care’ and ‘Infection’. But don’t think this is the only area where this album attempts to stray from the ordinary. ‘Control Mkii’ lends itself to Enter Shikari tendencies as they add an electronic fusion into the record, but still adding their own twist with at times haunting tones. Its follower, ‘Feed Me Your Lies’ completely switches up the album again as a darkened, mellow, powerful hint of a Nine Inch Nails style hits your ears.

If you’ve been concentrating on this review, then you’ll see that Dystopia can be compared to a lot of bands, and this is ultimately is its friend and enemy. Another Dead Hero successfully fuse all their inspirations together to create their own unique musicality, which comes through especially in vocality, but certainly doesn’t hide away in their grunge riffs. On the other hand, too many comparisons can be a negative, which gives the album a lack of overall focus at times. But what must be admired is that every track, all be it all so different, are successful each time.