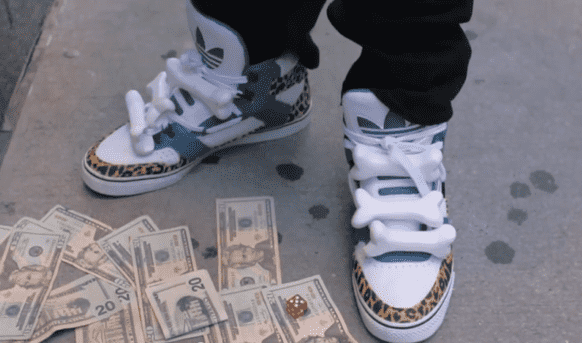 You may have been first introduced to the Adidas x Jeremy Scott sneakers when ASAP Rocky first became big. Remember the ‘Purple Swag’ video where we saw him wearing them? Or the ‘Peso’ video when we saw him rolling dice with the Jeremy Scott Bones collabs on? Well 2 years down the line the now platinum recording artist “bling blow” has released his own collaboration! Anyone that knows Rocky knows how into his fashion he is, and Jeremy Scott is one of his favourite designers. The shoe follows Rocky’s monochrome style and is nothing far from what you’d expect. It’s all blacked out with the stars and stripes design that we’ve seen a lot on his album covers. What do you guys think?

Shoe will be released later this Saturday! Being a designer sneaker, expect limited quantities and a price tag similar to your favourite pair of J’s!