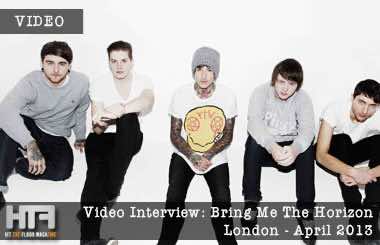 Finally the day came for HTF to interview the one and only Bring Me The Horizon. Since we can remember this Sheffield quintet have been the band everyone is talking about. Since the days of 2008’s ‘Suicide Season’, where emo fringes were actually cool, the music these lads produced has had an effect on so many people. Five years on we stood in front of a new age Bring Me The Horizon days before their fourth full length release is being tipped as the album of the year.

We speak with the band about the leaking of the album, their plans for the rest of the year and when they think they actually became ‘cool’. New member Jordan Fish explains how he is the real Jordan Fish and they go into full details of how they came to write their third and latest album ‘Sempiternal’.

Bring Me The Horizon will be touring the UK next month (May) and for more details on this and anything else you should check out their Facebook page here: www.facebook.com/bmthofficial