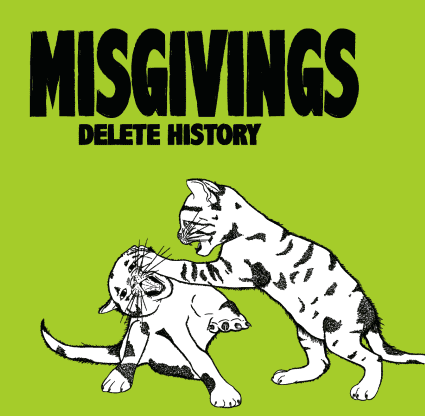 Misgivings are a brand new punk band that formed just last year, and are said to combine “a love of travelling, touring, drinking beers and bands such as Samiam, Jawbreaker, Husker Du, Strung Out, Alkaline Trio & Title Fight.” Hailing from Portsmouth right here in the UK, the band came together in Hamburg, Germany, after a drunken chat between good friends and now they are set to release their debut, self-produced and recorded EP entitled Delete History.

The six-track record kicks off with ‘Century‘, and immediately listeners are given an in-your-face, raw punk experience from what is essentially just four friends with musical talent. There’s no dressing it up or pretending they’re something they’re not and they definitely embrace it, which ultimately gives off this warm sense of family and belonging. ‘It’s A Bone, You Lucky Dog‘ follows the same way; it’s fresh and unprocessed, and while that may mean that the sound isn’t 100% perfect, it allows listeners to connect fully with the band instead – something decidedly better.

Despite being largely unknown, Misgivings play like they deserve to be known, and there’s no scoffing at the energy and heart they put in to their material. Their songwriting, if you take a moment to focus on the lyrics, is also quite interesting – ‘The Natives‘ plays out with, “let the chips fall where they may,” which is nothing short of inspiring from a punk band – as, after all, punk bands are famed for inciting anger above anything else.

‘Stay Dull‘ rounds off the record, and it’s confirmed that Delete History is a debut that Misgivings should be, and clearly are, proud of, especially as it’s completely DIY. They may be at the beginning of their career with a long way to go before they reach the stop, but as long as they continue with as much spirit as they’ve clearly had while working on Delete History, then they’re going to go far.

In this article:Misgivings, rock/metal, Rock/Metal Review