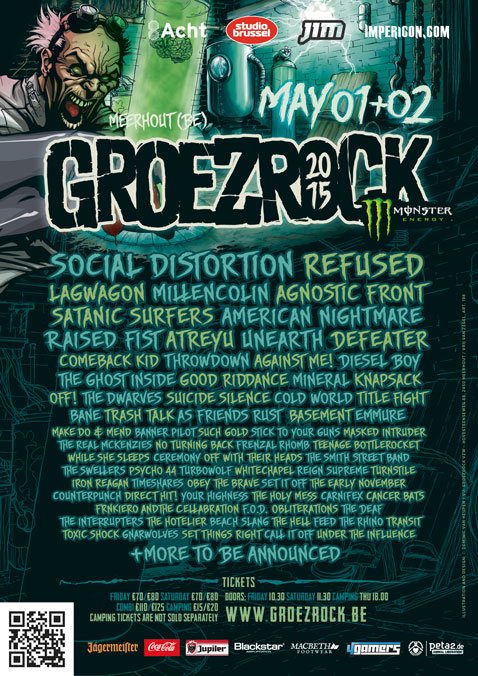 EVERYBODY HOLD THE PRESS; GROEZROCK 2015 HAVE ANNOUNCED MORE ACTS.

Yes, you heard correct. The latest incarnation of Belgian festival Groezrock is looking to blow up this May with nine new bands announced. The punk-rock, hardcore, emo, every-rock-you-can-think-of festival has announced several big names, such as Raised Fist, Diesel Boy, and ex-My Chemical Romance guitarist and vocalist Frank Iero’s new band FrnkIero AndThe Cellabration. Raised Fist haven’t played Groezrock in over 10 years, but still ‘have so many clear memories from that insane show’. Check out their new video for the song Flow from recently released album From The North below!

Other insane bands announced are Knapsack, Obliterations, F.O.D. (with music as brutal as their name, which is literally F*ck Off and Die), The Deaf, Call It Off, and Under The Influence.

Groezrock have promised 20 more bands to be released, but hey; this is the big festival to kick off the Belgian festival season, and when would we expect anything other than surprise acts? Keep your eyes on this one guys…

In this article:Call It Off, Diesel Boy, F.O.D., Frnkiero and the Cellabration, Groezrock Festival, News, Obliterations, Raised Fist, rock/metal, Rock/Metal News, The Deaf, under the influence