Hardcore punk outfit Gallows, have announced their October headline tour this morning along with their support acts for the whole tour. We just love it the fact the band are coming down to Devon, it is about time and epic band like themselves visit down South, bringing with them two support bands to knock you clean out. Tour supports with come in the shape of Feed The Rhino and Brotherhood Of The Lake, if you are regular readers of HTF it is no secret that we are HUGE fans of these guys too!

As well as the tour announcement the band have announced the details of their new self titled album release, due out September 10th. The band commented on the new album release:

“We made this record self-titled as it musically defines the band known as Gallows as we exist today,” explain the band. “This is the first of many releases to come from the house of Venn Records, our imprint, hijacked fromPIAS those long standing backers of independent rock n roll.”

“This our statement of intent, our laugh in the face of those who said Gallows were done when in reality we’re just warming up,” they continue. “We couldn’t feel more vindicated and proud.”

The track-listing is confirmed as below.

2. EVERYBODY LOVES YOU (WHEN YOU’RE DEAD)

A free download of the track ‘Last June’ is now available from www.gallows.co.uk – check it out to hear just how ferocious this new Gallows album is.

See the tour dates for October on the poster here below: 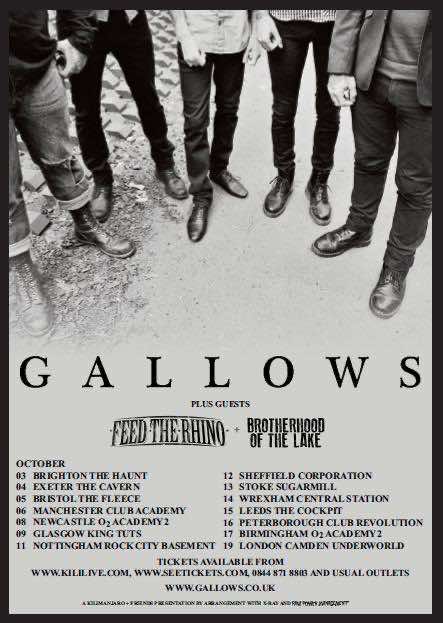 In this article:Brotherhood of the Lake, Feed the Rhino, Gallows