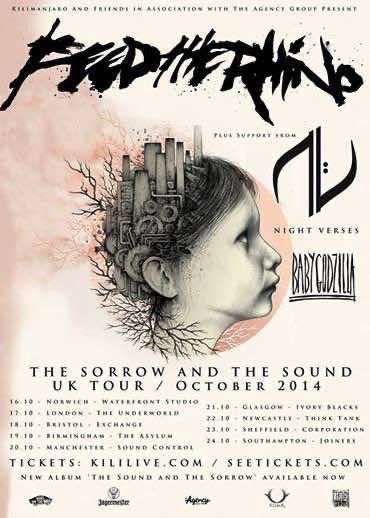 Feed The Rhino have just announced the news that they will be headlining an October tour with supports from Baby Godzilla and Night Verses.

The tour commences in Norwich at Waterfront Studio and ends in Southampton at Joiners. The string of UK dates celebrates Feed The Rhino releasing their latest and third studio album ‘The Sorrow and the Sound’, which went on sale today.

Tickets can be purchased via iTunes or Impericon from Wednesday 18th June. You can buy physical and digital copies via the two links below-
Impericon
Itunes

While your waiting, here is Feed The Rhino‘s ‘Deny and Offend’:

In this article:Baby Godzilla, Feed the Rhino, rock/metal, Rock/Metal News, The Sorrow and The Sound