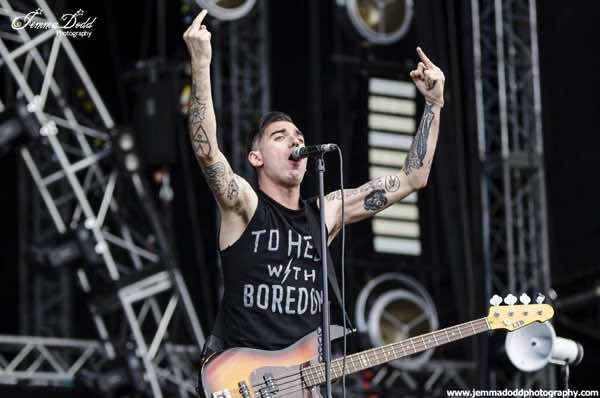 Last weekend Knebworth saw the mighty Sonisphere Festival take to it’s sacred grounds for one of the years biggest rock/metal festivals, and what a weekend it was. With legendary acts such as Iron Maiden, Metallica and The Prodigy taking to the stage, over 50,000 rock fans moshed, crowd surfed and drank their way into oblivion and HTF were there to get in on the action, party hard, and chat to some of the bands appearing over the weekend.

To kick off proceedings our roving reporter, Smiley Dave, was lucky enough to catch up with Chris #2, of Pennsylvania punks, Anti-Flag, for a quick chat prior to their set. Having been around since 1988, the band are a part of punk-rock royalty and well known for their political views and punk-rock ethic. We had a chat about their recent appearance at the Glastonbury Festival along-side the legendary Billy Bragg, talk July 4th – Independence Day- and their double gig booking, and find out if 20 years in the game has made going on stage easier.

Make sure to check out more from Anti-Flag at – https://www.facebook.com/anti.flag.official

In this article:Anti-flag, Sonisphere Festival